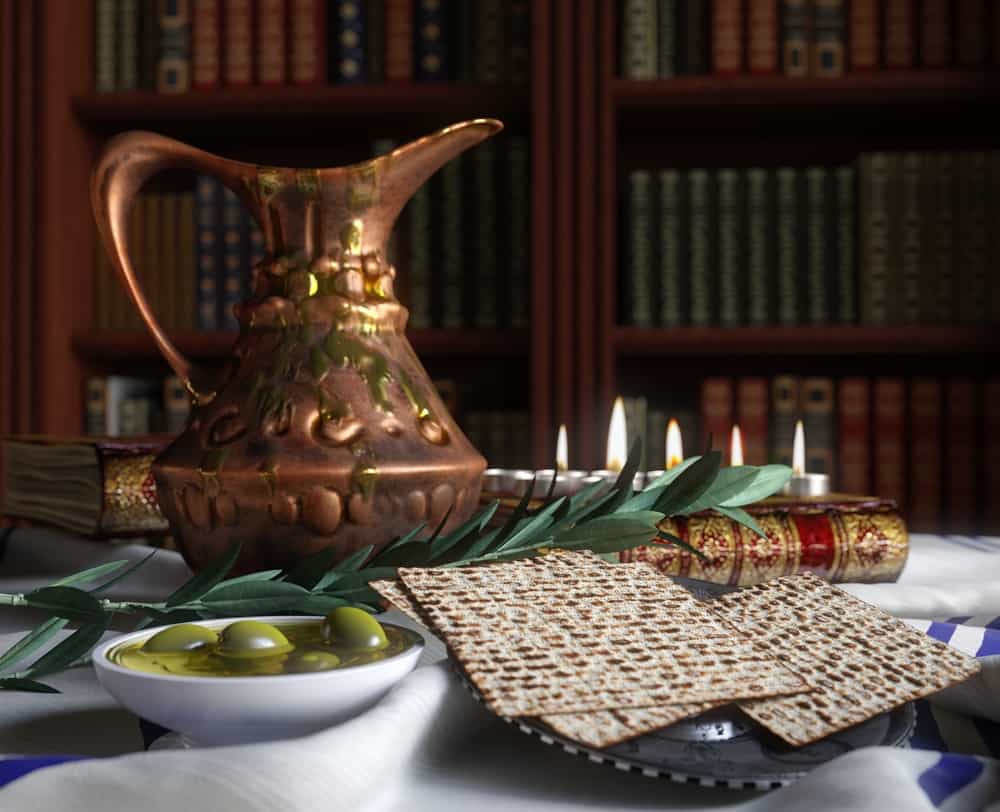 Passover is one of the most significant Jewish holidays on the calendar. If you’re planning to celebrate this holiday in the future or are simply interested in learning more about Passover, it is best to start at the beginning.

Passover is the eight-day celebration that commemorates the Jews’ exodus from slavery in Egypt and typically falls in the spring. Also known as Pesach, Jews observe Passover by avoiding leavened bread and eating a Seder meal that includes symbolic food and drink and recounting the story of the Exodus. The holiday also commemorates when God passed over the homes of Jews during the tenth plague visited on Egypt.
A celebration of freedom and new beginnings, Passover is a joyful time for Jews.

While the specific details of Passover celebrations vary slightly, it is generally observed for seven to eight days. The biggest event of the celebration is the Seder. This is a large, festive meal on the first night or two nights of Passover. The Seder meal incorporates singing, telling the story of the exodus, drinking wine, and eating unique dishes.
During Passover, Jews abstain from eating any leavened foods, like rolls or bread. This is because, according to legend, the Jews were in such a rush to escape from Egypt that they didn’t have time to wait for the bread to rise. As a result, they ate unleavened bread during their years of wandering the desert.
The other main tradition of Passover is the hiding of the afikomen, wherein half of a matzoh is hidden and children are encouraged to search for it. Generally, the child that finds it receives a prize.
To celebrate Passover, Jews clean their homes thoroughly and rid the house of all leavened products. In some cases, these products are sold through the synagogue. Some families choose to burn or hide them. Once the house is free of leavened products, families generally cook special Passover dishes, which they only make once a year. These may include matzoh, maror (a selection of bitter herbs), charoset (a nut and fruit paste), zeroah (a shank bone), beitzah (hard-boiled eggs that symbolize the life and birth of the spring season), and others. Tradition requires that you drink four whole cups of wine throughout Seder. A separate cup of wine is set aside for the prophet Elijah, who legend promises will visit during Passover.

Seder starts with the kiddush, or a blessing, over a cup of wine. The four cups represent four expressions of freedom. By maintaining their Hebrew names, language, morality, and solidarity, they expressed their freedom from slavery. Wine represents joy and reclining while drinking reflects the new freedom to enjoy leisure after their liberation.
Next, the family washes their hands in a ritual so that they will be clean when eating the first course of the meal, which must be dipped in water. A blessing is said while dipping a small piece of vegetable in salt water and eating it.

Families set out the ceremonial foods on a Seder plate, including three matzohs. Someone breaks the middle matzoh in half, returning the smaller piece to the Seder plate. Then, a member of the family reads or recites the Haggadah — the story of the Jews’ escape from Egypt.
The participants eat the ceremonial foods in order, washing hands before eating the matzoh and saying the appropriate prayers. Then, the family moves on to the main holiday meal. Traditionally bold eggs start the feast, followed by beef brisket or roast chicken. Vegetable stew or soup, fish, root vegetables, and other dishes vary according to region or country of origin.

Jews celebrate Passover beginning on the 15th of the Hebrew month of Nisan. It continues for seven to eight days and generally occurs in April or March. While the days of Passover change somewhat each year, it always takes place at the same time of year.

The History of Passover

According to the Bible, Passover owes its roots to the following story of Moses: During the enslavement of the Jews in Egypt, Moses asked Pharaoh, the Egyptian leader, to free Israelite slaves. Unfortunately, Pharaoh rejected him time and time again.
Upon this rejection, Moses warned Pharaoh about the cost of his defiance. Moses told him that God would punish the Egyptian people with a string of 10 plagues. These would include the plague of frogs, the plague of boils, the plague of hail, and many others. At this point, God told Moses to instruct the Israelites to mark their homes. He promised to “pass over” them when bringing about the last plague. This is where the tradition of Passover got its name, and why it continues to be so critical and widely celebrated today.

The Enduring Importance of Passover

An ancient tradition rich with culture, history, and ritual, Passover remains one of the holiest times of the year and serves as a force to get families together and unite people who may otherwise live on the other side of the country or world from one another in happiness and a celebration of freedom.