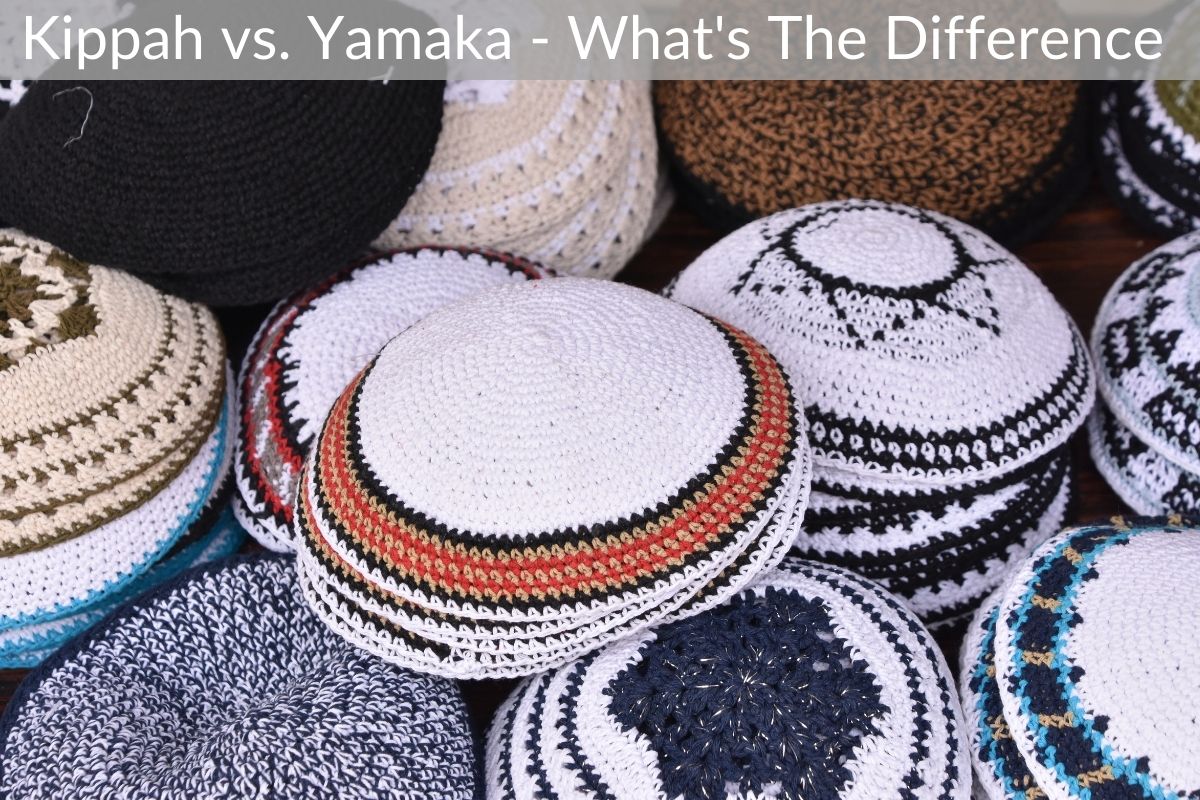 Every religion has certain rules that people need to follow. In Islam, women are required to cover their heads and bodies, so they are not exposed to men that are not blood relatives. Amish people lead a simple life without any entertainment because they believe God is personally interested in them, Jews worship in a synagogue, and this list goes on.

Religion encompasses many things, which also happens to include attire and accessories. Today, our topic of discussion is the cap worn by Jews, referred to as Kippah. There are different terms for this cap, which can confuse people. Let’s take a look at them:

This is the standard Hebrew word for the traditional skullcap worn by Jews. This cap is worn at all times when Jewish men are praying or entering Synagogue.

This is the Yiddish term for Kippah. It used to be used more often by the previous generations when Yiddish was spoken openly. Today, you will mostly hear it from non-Jews or during a conversation between people discussing the religion, as mentioned prominently in books.

The word Yamaka has two meanings. It is a Buddhist text and an anglicized word for Yarmulke. Think of it as an alternative translation that’s also considered a misspelling.

Now that you know the difference between Kippah and Yamaka, let’s take a look at some FAQs:

Where Does the Word Yarmulke Originate From?

It is believed that the word itself is derived from the Aramaic phrase yari malka, which translates to “fear of the king.” The other Hebrew words have no evidence in history. As mentioned earlier, Yamaka is an alternative word for Yarmulke. The origin of this word is unknown and most probably popped up in the modern world.

What Does a Yamaka Represent?

The skullcap represents piety in Judaism. Just like a hat or scarf is worn by women in fear of and respect for God, a Yamaka is worn in the same manner, but the Jews believe it separates human beings from God.

How Is a Yamaka Worn?

A Yamaka is usually made of suede and has high friction. This makes it great for bald heads. For people who have silky hair, a double-sided tape helps do the trick and keeps it in place. Some Yamakas come with Velcro that helps tighten the cap from the sides.

When Is a Yamaka Worn?

Orthodox men wear a Yamaka at all times when they are attending the Church. Non-Orthodox Jews usually wear them during prayers in religious ceremonies or at synagogues. A Yamaka is always available at Jewish funeral parlors and in synagogues.

How Is Yamaka Described in Synagogues and Biblical Texts

Text in the Talmud says that Jewish men are required to wear a Yamaka because it allows them to become familiar with the fear of going to heaven. So, wearing a Yamaka honors God. Rabbi Hunah ben Joshua, a Jewish Talmudist, never walked further than 6.6ft without wearing a Yamaka. According to him, he always felt the divine presence on his head.

The exact meaning of Kippah in Hebrew language is a dome. This name accurately describes the skullcap and the way it covers the head. Yamaka, which is a Yiddish term, is related to an Aramaic phrase that translates to fear of the King. As for Yarmulke, its meaning is similar to the covering worn in the Middle Ages in the Church, and it has a Latin origin.

In biblical texts, most head coverings are described as a way that honors God in all religions. A reference that is quite popular can be found in 2 Samuel 15:30. It describes the incident when David, a man of God, ascended weeping on the Mount of Olives. He was barefoot with his head covered. The men who saw him immediately covered their heads and started to weep.

Islam has many different head coverings that depend on the region the person belongs to. The two main head coverings for males and females are Taqiyah (a rounded skullcap for men) and Hijab (a scarf for women).

Taqiyah is a rounded and raised skullcap that men wear during prayer. Prophet Muhammad (PBUH), the last Prophet sent down by Allah to preach Islam, was believed to wear a Taqiyah at all times. Many men wear a Taqiyah with great pride to show their faith.

Hijab refers to a veil that is intended for Muslim women. It covers their head and chest and is to be worn by the females who have gone through puberty. Women are required to wear a Hijab when males, who are not related to them, are present in the room. Muslim women wear a Hijab because Quran urges them to wear a modest dress to cover their genitalia and breasts.

There are different versions of Hijab. For example, Arab women wear a Niqab that covers their face but exposes their eyes. Afghani women wear a Burka, which covers them from head to toe.

Christianity does not have any traditional headwear like in Judaism. However, they do have symbolic hats worn by select spiritual leaders while praying. Two of the most common ones include zucchetto and biretta.

Zucchetto is hemispherical in shape and looks like a Kippah. It is worn by the leaders and is available in five colors specific to the cleric’s ranking.

Biretta is a cap in a square shape with three peaks. It is worn by seminarians, deacons, bishops, and priests, usually during outdoor services or in a choir. The cap comes in different colors, which indicate the cleric’s ranking.

A turban is worn in many religions. It’s a long strip of cloth wound up in a specific manner. The design depends on the region the person belongs to. Usually, a turban is worn to keep hair clean. You will mostly see Sikhs from the Punjabi region wearing turbans.

Originally, they were worn by high-class people in the Sikh culture, which helped separate regular people and elitists. This changed when Guru Gobind Singh Ji said in the 17th century that all Sikhs belong to the upper class.

And there you have it ― the difference between Kippah and Yamaka! Yes, the words have the same meaning but different backgrounds. In the end, they both refer to the religious cap worn by Jewish men.