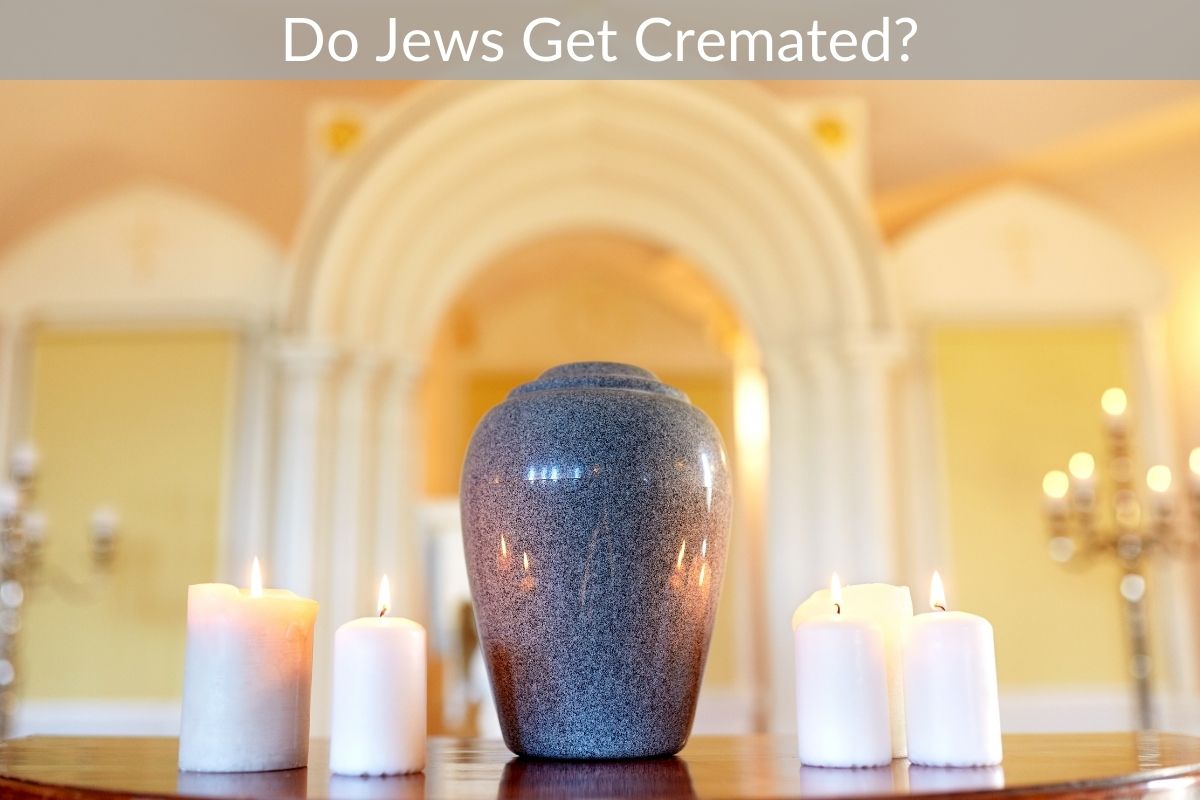 Jewish law states that all Jews need to be buried following death, which has been part of Jewish practice since the earliest days.

Jews do get cremated but often have to go against the rules indicated by certain authorities; cremation is not strictly prohibited but is discouraged as a practice.

The Torah, which is the Jews’ holy book, confirms that humans are to be buried, and there has been a huge response from Jews against cremation following the events of the Holocaust.

However, many Jews in this day opt for cremation, which is a personal choice that has been pushing Jewish authorities to consider whether cremation should form a part of Jewish culture.

This has led to many questions being asked, such as whether a rabbi is allowed to officiate at a funeral for a Jew who was cremated.

Let’s explore the topic of cremation in Jewish tradition in more detail.

Many Jews who defend cremation as a personal choice point to no clear-cut prohibition against cremation in Jewish legal sources.

However, there are many prohibitions regarding the defilement of dead bodies and comprehensive procedures for handling the dead before burial.

Those supporting cremation also point out biblical sources that provide some evidence for Jews practising cremation in early times.

That said, there is a lot of Jewish literature about burial as the only method of dealing with the dead.

Genesis (3:19) states that God declared man to ‘return to dust from whence he came.’

Deuteronomy (21:23) states that ‘executed criminals are to be buried’.

Other rabbinic sources also point to burial, which is the main argument made by Jews who are against cremation.

Moreover, there are many arguments against cremation. According to a Jewish mystical tradition, the soul departs slowly from the body. Burning the dead can make the separation forceful and painful for those who opt for cremation.

Historically, cremation was considered a pagan practice that Jews were instructed to reject.

And since the Torah states that the body is the exclusive property of God, it is not to be defiled in any way, which some consider the same as cremation.

Orthodox and Conservative sources use these arguments to denounce cremation as prohibited and wrong.

However, the Reform movement has tackled this question over the past years, and the most recent rabbinic opinion makes it known that the practice is not sinful but should be discouraged.

Can You Bury a Cremated Jew in a Cemetery?

Generally speaking, it is allowed to bury the remains of a Jew in a Jewish cemetery.

This is because Jewish tradition does not exempt Jews from their burial grounds even if they have followed a different path than is clearly defined in Jewish law.

Some burial societies may be against the burial of cremated Jews because they feel it would encourage others to follow this process. Still, by and large, it is acceptable for Jews’ remains to be buried at Jewish burial grounds.

However, it is interesting to note that nothing specific relates to the burial of ashes. You would have to make a formal request to many Jewish cemeteries to ask if they permit the buying of Jewish remains.

The Reform movement takes a strong stance on the argument for cremation and insists that Jews ought to be buried in cemeteries after cremation.

Are Rabbis Allowed to Officiate The Funerals of Jews That Were Cremated?

The answer isn’t so clear-cut for this particular question: it depends.

The Conservative movement came out with a rule that stated that a Jewish rabbi should not officiate the funeral of a cremated Jew if the deceased’s family went against the rabbi’s advice.

However, the rabbi is allowed to officiate at a ceremony before the actual cremation.

If the deceased’s family does not consult a rabbi before cremation, the rabbi may decide to supervise the internment.

The Reform movement has no objections to rabbis presiding over funerals involving cremations.

Should The Deceased’s Wish Be Granted For Cremation?

The Shulhan Arukh clearly states that if the deceased wishes to be cremated, the heirs are not to follow

There are differing opinions on this view. The Orthodox and Conservative authorities state that the deceased wishes may be considered by their children. Still, they do not have to feel obliged to the rules indicated by the Shulhan Arukh.

The Reform movement has stated that children are not prohibited from following their parents’ wishes, but they should not feel like they have to if it goes against their own religious principles.

Is Burial More Expensive Than Cremation?

Cremation is cheaper than burial, where statisticians determined the average cost of a funeral in the United States to be 7181 USD in 2014, and the cost of cremation was 6078 USD.

Although there is no big difference, cremation can still be much cheaper if certain unnecessary services are foregone.

However, it is important to note that burial is fairly important in Jewish tradition.

Many Jewish communities assist in subsidizing traditional burials, especially when families lack the resources and funds needed to carry out the tradition.

It is also traditional for Jews to opt for simple burial caskets instead of the more expensive variety, saving money because many funeral homes like to market their most expensive options.

Is Embalming The Deceased Allowed in Jewish Tradition?

The embalming process involves preserving human remains to be presented to the public for viewing purposes.

Like cremation, embalming is inconsistent with Jewish traditions relating to death and burial.

According to some Jewish traditions, preservation itself is not the best way to handle death, which states that the dead ought to be buried as quickly as possible.

However, in some special situations, Jews are allowed to engage in the process of embalmment, such as when the deceased’s remains must make travel to a different country for burial.

Jewish law is clear in some places, but many authorities have differing opinions on how to handle best the procedures surrounding death and burial.

The Orthodox and Conservative authorities have similar opinions, while the Reform movement is laxer about certain rules and prohibitions.

For Jews looking to arrive at a definitive conclusion, they should consult all relevant authorities and make a personal decision.