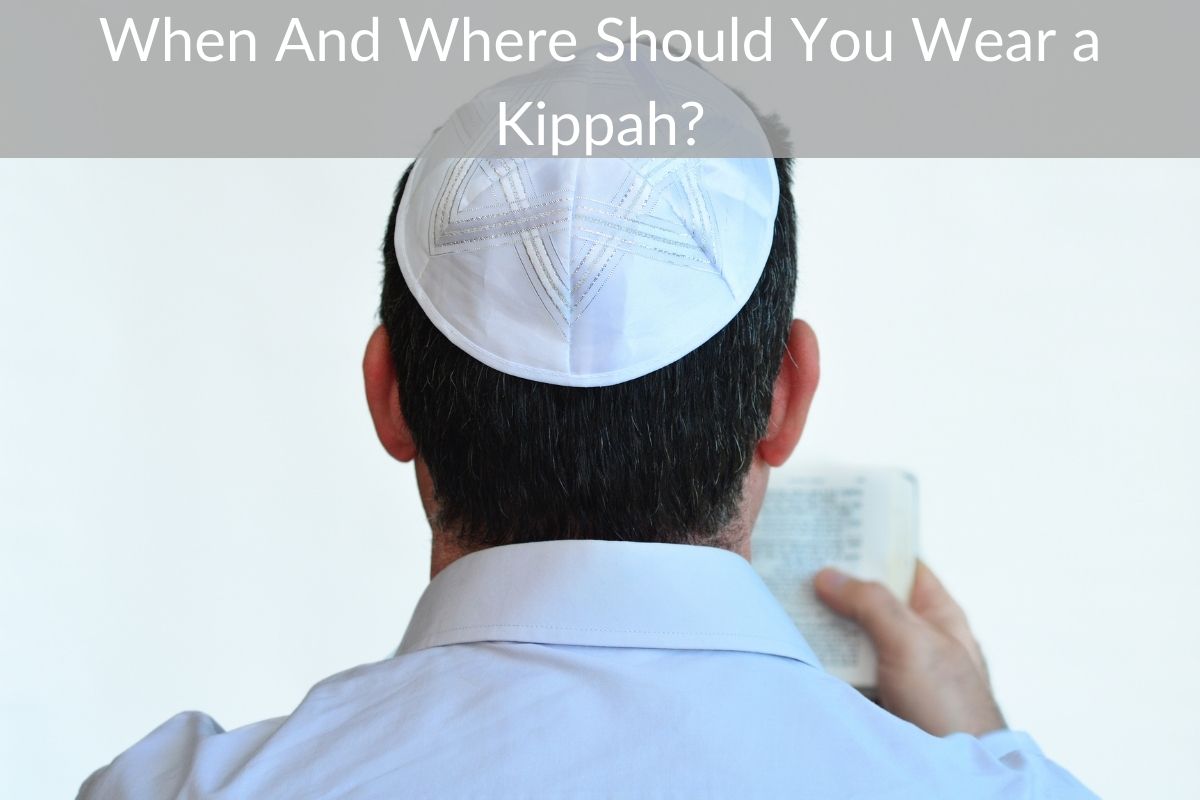 The kippah is a religious cap worn by Jews, which is an important part of their identity.

Many Jews think that wearing religious attire brings them closer to God, and it is a sign of respect and adherence to Jewish laws and customs.

Traditionally, it is only worn by Jewish males, and many Orthodox communities often wear the kippah at all times.

Since many Jews interpret the Torah and traditions differently, there are certainly mixed opinions about when and where to wear it.

When And Where Jews Wear The Kippah

Since the kippah is thought to bring Jews closer to God and is treated as a sign of respect, many religious Jews choose to wear it at all times.

However, some may only wear it on religious occasions, such as when they’re visiting the synagogue or observing a religious practice.

The tallith is also a religious attire that many Jews wear during prayer services, festivals, or on the Sabbath.

It is essentially a prayer shawl that is wrapped around the neck and is worn as a reminder of the 613 commandments that were revealed in Judaism and instructed by God to be followed.

In most cases, it is mainly men who wear the tallith, but in some Jewish congregations, some women choose to wear it since it is an option.

The need to wear a kippah did not arise from any passage in the Torah or Bible, but it is a tradition that came about from wanting to be pious in God’s eyes.

Since God is ever-present and aware of every action we take, it is justifiable for Jews to wear the kippah to practice Judaism properly.

What Does The Talmud Say

It was related in the Talmud that astrologers informed a woman of the inevitability of her son turning into a thief.

Since she took these words seriously, she tried her best to get her son to wear the kippah and have his head covered at all times to protect himself from evil forces and instill a sense of God’s presence in him.

Fear of hell and the promise of heaven is a huge motivator for many religious Jews to abide by the customs and religious teachings in the Torah.

When the son was once perched under a palm tree, his kippah fell off his head.

As soon as this happened, he felt the urge to eat fruit from a tree that belonged to someone else.

At that moment, he realized the importance of wearing a kippah and covering his head because it is ultimately God’s presence that protects us from our egoic nature, which is impulsive and detrimental to our spiritual development.

In Talmudic times, the act of covering your head was typically carried out by men of great stature.

However, as traditions and customs evolved with time, it became more common for all Jewish males to begin wearing the kippah, especially during religious practices.

As far as Jewish customs go, once a practice becomes universally accepted, and all Jews start abiding by it, it becomes halachically obligatory.

It is important to realize that Jews consider wearing the kippah to be a form of distinction between them and others.

Many interpret the prohibition ‘you shall not follow their statutes’ very seriously and choose to wear a kippah at all times to abide by this principle.

More About The Kippah

Since the kippah is sort of like a badge of membership that separates them from non-Jewish folks, they wear it as a symbol of pride and commitment to the teachings in the Torah.

Although the religious cap has no inherent meaning, it indicates that a Jewish man is religious and follows the teachings laid down in Judaism.

It is a mark that a man is heavily invested in Jewish traditions and takes part in all religious activities with great enthusiasm and commitment.

Jews are discouraged from engaging in acts that could be considered inappropriate, and the appearance of impropriety is one reason why Jews may choose to wear the kippah at all times.

An example of something inappropriate is for a Jewish man on Shabbat to visit an establishment to use the bathroom when it would be ideal to visit a religious site instead.

The reasoning behind this is that if they were to visit a bank to use the bathroom, someone might think they’re withdrawing money from their account, which is not allowed on Shabbat.

Jews must refrain from engaging in misleading acts, which is another reason many choose to wear the kippah since it informs others of the individual’s investment in a pious life.

However, you must know that Jewish males have the option to cover their heads in other ways, such as by wearing a hat instead of a kippot.

This is a personal decision because not every Jew wants to announce their religion and ethnicity to others if they can avoid it.

By choosing to wear a regular cap or hat in a synagogue, Jews still abide by their teachings and avoid misrepresenting themselves.

Since the kippot is also a popular choice for covering their head, many choose from a large variety of options to find one that suits their preferences.

A black velvet kippah may be worn by very religious Jews and is generally avoided by others who do not wish to be known as strictly pious.

There is nothing wrong with this since many Jews wish to observe traditions when they are in the act of a spiritual practice or visiting the synagogue but do not want to broadcast their religion to people they do not know.

People who are not observant in Jewish matters often opt for a black or white silk kippah, which is a single-use item that those who do not own a kippah can wear.

It indicates that one is not an authority on Jewish matters and is a casual practitioner.

Which Jews do Not Wear a Kippah

As far as the reform movement goes, you can expect there to be many Jews who choose not to wear a kippah at all.

It was typical for Jews in the reform community not to wear a kippah in the synagogue for many years.

In the past several years, this has changed since you are likely to encounter many men and women wearing kippot in various reform temples.

However, there are still many practicing Jews who choose to leave their heads uncovered, even when standing on the bimah.

This makes it evident that wearing the kippah is a personal choice, and there are no serious negative consequences for not doing so.

With the passage of time, the customs continue to evolve, and more progressive Jews continue to practice a lenient and more accepting form of Judaism.

The choice to wear a kippah is up to Jewish males, who may be very pious in their beliefs or somewhat progressive.

A wide variety of people choose to wear the kippah at all times, on religious occasions or not at all, which does not make them lesser than others who are heavily invested in the Jewish life.

The kippah symbolizes respect and thought to protect Jews from the gaze and temptations of evil, and many wear it to identify more deeply with their faith and beliefs.