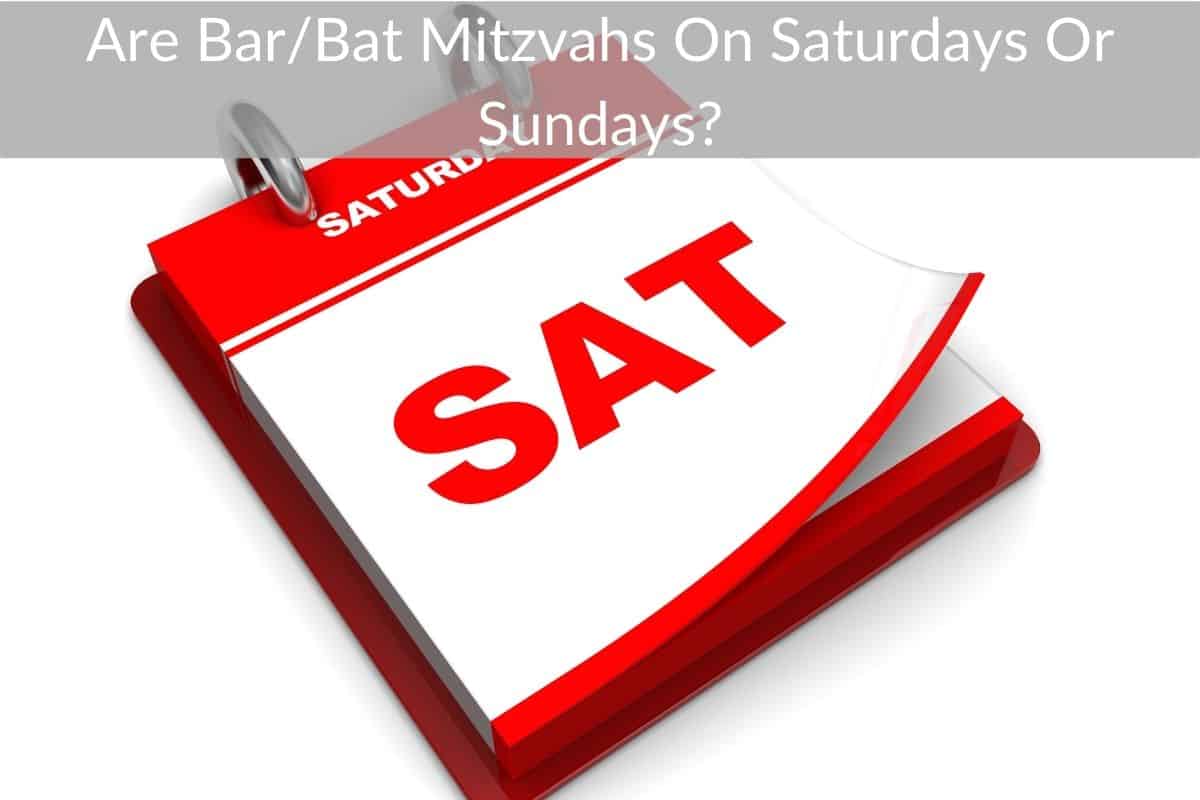 Bar and Bat Mitzvahs are rituals in the religion of Judaism that children are a part of when they reach a certain age. It is said that until they reach this age, the parents are responsible for their child’s actions and when they “become” a bar or bat mitzvah then they are held accountable for what they do.

Traditionally, it is part of the Jewish culture that when a boy reaches the age of 13 he participates in a bar mitzvah and then he is able to participate in different ways in the Jewish community.

For girls, it is called a bat mitzvah and they participate in this when they reach the age of 12 or for Reform Jews, 13.

These rituals must be done on a certain day. If you aren’t familiar with the Jewish customs, you could be wondering if a bar or bat mitzvah takes place on a Saturday or a Sunday.

Most Bar/Bat Mitzvahs are held on the Sabbath which is Saturday but this isn’t required. The ceremony can take place either in the synagogue or in private as well.

The ceremony of the bar or bat mitzvahs is typically held around the child’s 12th or 13th birthday and takes place in the synagogue. For many Jews, it is the first Saturday after their birthday.

The child prepares for the ceremony by studying the Torah and then reading from it. They also put on a tefillin for the first time and chant the “haftarah”.

The whole ritual in Judaism celebrates the child coming of age when they are responsible for their own actions while becoming a part of the Jewish community.

Bar or bat mitzvahs usually happen on Saturday which is the Jewish Sabbath but is it required of them to do it on this day?

Currently, it is trending that the bar mitzvah happens on a Monday or Tuesday when the Torah is read publicly making it easier for out of town guests to attend. Or if a Jewish holiday falls on a Wednesday then it can be held on that day.

After the ceremony, a party is held for the child. Guests coming to the ceremony must dress according to their guidelines and cash gifts as well as Hebrew faith-themed gifts is traditionally given to the child.

An article from ReformJudaism.org on What to Expect at a Bar or Bat Mitzvah Service says, “Most b’nai mitzvah services are conducted on Shabbat morning (Saturday morning). Some congregations schedule them for Friday evening and some for Saturday evening. In addition, b’nai mitzvah services can occur on Rosh Chodesh-the first day of the Hebrew month.

By the way, some people remember girls only having the chance to become “Bas Mitzvah” on Friday evenings at Conservative congregations a number of years ago. That is not necessarily the case anymore and most Reform congregations don’t differentiate between when boys and girls can have their services.”

So, the bar/bat mitzvah ceremony can be held any day but is typical on the Sabbath or Saturday.

How Long Does A Bar/Bat Mitzvah Last?

A Bar/Bat Mitzvah ceremony usually last for about 3 hours and then the party afterwards can last up to 45 hours.

As you can see, this Jewish ritual lasts for a long time. The ceremony itself can be 3 hours long with about 20 minutes of it being the child reading from the Torah. Then a party follows the ceremony.

This party lasts for about 45 hours and if it is the children only then about 34 hours.

Times of the services vary according to the customs of that particular Jewish congregation. To the Jews this ceremony is important and when they celebrate they tend to do so for a long period of time.

One article talks about What To Expect When Attending A Bar/Bat Mitzvah. They state, “Bar/Bat Mitzvah represents a transition from childhood to a full-fledged member of the Jewish community. As such, the adolescent is no longer a child under the protection of his/her parents, exempt from fulfilling the commandments of the Torah.

Instead, he/she becomes personally responsible for his/her own Jewish identity and for actively participating in Jewish life. The young adult is now obligated to follow all the Mitzvoth. The event is a time-honored rite of passage. Technically, a Jewish boy/girl automatically becomes a Bar/Bat Mitzvah on his/her 13th/12th birthday, with or without a ceremony in a synagogue. The ceremony is the public acknowledgment of the transition.”

Because a bar or bar mitzvah is big deal in a child’s life it can last for a long time.

What Is The Difference Between A Bar Mitzvah And A Bat Mitzvah?

These Jewish celebrations are traditions for their culture. You may have heard the terms bar mitzvah and bat mitzvah and wondered, what’s the difference between the two?

The main difference between the two is that bar mitzvahs are for boys and bat mitzvahs are for girls. Both occur around the child’s 13th birthday except in some cases it is 12 years old for the girl.

The reason that sometimes the girls celebrates her bat mitzvah on her 12th birthday depends on what kind of Jew she is. A Reform or libveral Jew will hold the ceremony close to the girls 12th birthday while Orthodox and Conservative Jews will perform the ceremony around the girl’s 13th birthday.

Although the ceremony as a whole is pretty much the same, the entire services of either the bar or bat mitzvahs vary according to each congregation.

In an article by BBC entitled, Bar and Bat Mitzvah, and Bat Chayil, they explain that, “The Bat Mitzvah is only practised by Reform and liberal Jewish communities. The ceremony follows a similar pattern to the Bar Mitzvah and happens around a girl’s 12th birthday.

During her Bat Mitzvah, a girl may read from the Torah or she may instead read a prayer from the siddur. Traditionally, within Judaism, males and females are not thought to have the same responsibilities. As a result, in some Jewish communities, some rules (such as the requirement to read from the Torah) are less strict for girls than they are for boys.”

There isn’t a set day on which to have a bar/bat mitzvah because it all depends on what is done by the particular Jewish congregation the child is a part of. Traditionally, the ceremony takes place the Saturday after the child’s 13th birthday (sometimes 12th for girls).

Still, the ceremony can be held on other days of the week as well as in the synagogue or privately. The ritual lasts for hours and sometimes days consisting of reading of the Torah, chanting of the “haftarah” and a party afterwards.

This ceremony shows responsibility being placed on the child for their actions as well as becoming a member of the Jewish community. There isn’t a set day on which the bar or bat mitzvah is held, although typically it is held on the Sabbath or Saturday.