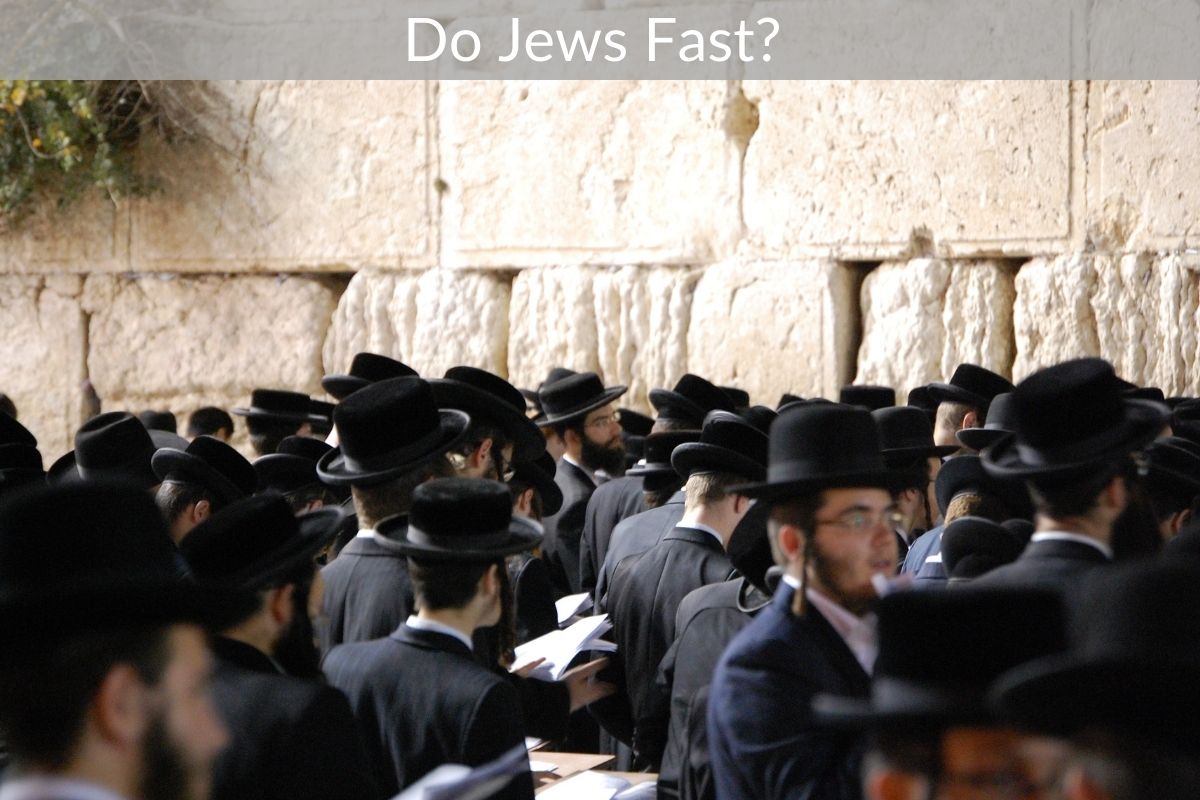 Fasting is a process in which we refrain from eating all foods and drinks to allow ourselves not to be dictated by feelings of hunger and thirst.

There are many benefits one can achieve by fasting, and it is a common practice for many religions, including Judaism. Muslims also have a dedicated month for fasting, referred to as the holy month of Ramadan.

Many details are to be covered in response to the questions ‘do Jews fast?’ and ‘Is fasting for Jews?’.

Does Judaism Include Fasting?

Fasting is considered a spiritual practice in many religions, including Judaism.

Jews partake in six fasting days as pertained in the Jewish Year.

Aside from some exceptions due to illnesses and health problems, adult Jews must avoid drinking or eating food from dawn till dusk.

According to the Aish Rabbi, fasting is a way to repent for the harmful behaviors of Jews’ ancestors that invited calamities and disasters in the past and bring awareness into modern-day behaviors that are similar and may contribute to negative situations that are arising in their lives.

When fasting, Jews often audit their behaviors and make a firm conviction to stay on the righteous path and avoid the temptations of evil.

The Book of Our Heritage states that those who observe fasts without contemplating their actions and behaviors miss the mark.

Those who fail to engage in this practice are prioritizing the act of fasting, which is considered secondary and paying less attention to repentance of sins, which is the whole point.

Fasting is meant to be a form of repentance for committing sinful behaviors. By whole-heartedly engaging in repentance, Jews must observe a change in their behaviors.

However, repentance without the act of fasting is incomplete.

Fasting was deemed compulsory by the Torah and prophets in the Jewish tradition and followed religiously by devout Jews in Israel and other parts of the world.

Fasting serves an important function and must be unique to the individual using it as a means for repentance.

Judaism’s philosophy around fasting serves to achieve integration of the physical and spiritual modes of existence.

Jews do not simply wave off the physical aspect of existence but recognize that living correctly in the physical world strengthens the spirit.

Jews believe that the physical and spiritual realms are inextricably linked and must be implemented together for true spiritual development, or raison d’etre.

The physical realm is seen as a gateway to contact the spiritual; this is why Jewish traditions are respected, and Jews wear nice clothing, prepare delicious meals, and tidy up their houses for Shabbat.

Fasting as a Means For Spirituality

Jews see seemingly mundane tasks unavoidable in daily life as a gateway into the spiritual realm.

When your environment is clean and orderly, when food is enjoyed thoroughly, and when you feel a sense of majesty in beautiful clothing, you bypass the mundaneness and achieve tranquility in the small things in life.

These heighten the sense of connection to God, and Jews use the physical aspects of life as a tool to achieve entry into the spiritual.

Hunger is the need or desire for food; you can also compare it to other forms of desire or craving, such as for materialistic gains like power and success.

Spirituality is subtle and requires experience on the part of humans to discern from other seemingly similar feelings.

Jewish law encourages the process of recognizing the spiritual in the lives of Jews and dictates strict times for practicing certain behaviors so that the true nature of physical sensations becomes apparent, pointing to profound spiritual realities.

By making fasting compulsory on certain days that require repentance, Jews can isolate feelings of longing to walk the correct path to liberate the world.

Focusing on the sensations of physical hunger and attempting to see the true nature of these sensations can propel us towards true repentance.

Fasting is also an excellent way to acknowledge and reconcile the difficulty of not resonating with the reasons for observing fast.

While improving your knowledge about the days that call for repentance can serve as an important context, you may still feel alienated from its essence.

By observing fast, loss and vulnerability become apparent, and by taking action, these common feelings can be juxtaposed with the original meanings of events that led to the initiation of fasting as a spiritual practice.

Parallels Between Spirituality of Different Religions

Buddhism is often referred to as ‘the religion of no religion.’

Sufism is to Islam what Buddhism is to Hinduism.

Many standard spiritual practices lead to spiritual enlightenment if practiced correctly and whole-heartedly.

Unfortunately, many spiritual concepts turn into unshakeable dogma that keeps followers bound in a self-created prison that dramatically colors their worldview.

Buddhists engage in a spiritual practice called meditation, which is the fastest method to ‘obtain’ spiritual enlightenment.

Muslims observe fasts like Jews but frame it a bit differently and claim that Shaitan or Satan gets chained in hell for the holy month of Ramadan.

A common indicator of spirituality is symbolism, where many Sufis believe that Satan symbolizes the ego, which is also referred to as Nafs in Islam.

Buddhism also puts forward the notion of ‘no-self,’ which is difficult to explain but means that you as you conceive yourself does not exist.

The ego or the sum of your identities, behaviors, thoughts, and feelings – what you think of as you – is just a process of identification, and not a personal ‘I/me/subject’ but an impersonal ‘It.’

Once you genuinely see past this illusion of duality, of subject and object, of self and other, you attain spiritual enlightenment.

Religion is defined as a tool to get to this ‘final destination’ but becomes claimed by the ego as something personal because it’s so inextricably linked to who you think you are.

True spirituality transcends all dissimilarities and religion, where Truth with a capital T is accessible to every person no matter their creed, race, or social standing.

In this regard, we are all practicing to achieve the same thing but fighting to defend our subjective truth, which is a trap.

To answer the questions ‘is fasting for Jews’ and ‘do Jews fast,’ it is clear that Judaism and many other religions follow this process to access realms of spirituality.

This entry is possible by refraining from indulging in physical sensations and seeing them for what they are by breaking identification with them.