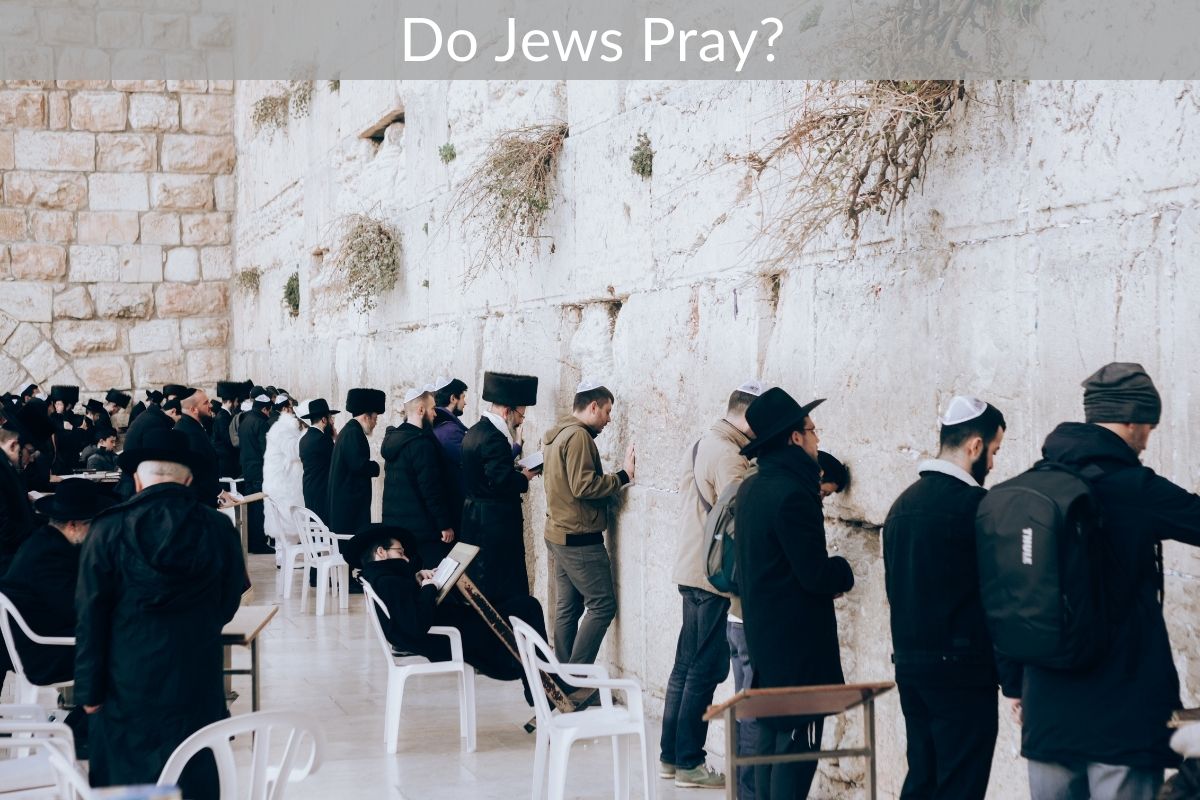 Jews do pray. Like the other Abrahamic religions, prayer is an important aspect of the Jewish faith, and they are obligated to perform the act.

During prayer, Jews will say the words of Siddur and recite blessings. Jewish prayers help to strengthen their relationship with God while they fulfill God’s commandments.

Prayer is crucial to their religion, and there is much more to their daily prayers than just the surface details:

It is important for Jewish people to be completely focused on their prayer while they are performing the act and not get distracted by anything else since it can affect the acceptance of their prayers. The prayers offered by Jewish people should also come deep from the heart and have meaning for the person’s prayer to be accepted.

The prayers offered by Jewish people are for God, and they help the people fulfill their duty to God while also building on their relationship with God.

How Often Do Jews Pray?

Jews are supposed to pray three times a day, formally. Once in the morning, afternoon, and then evening. The prayers are called shacharit, minchah, and maariv, respectively. These prayers must be offered daily by all Jews since it is an obligation that God has imposed on the people. Besides fulfilling an obligation, saying the three daily prayers also helps people build their relationship with God and communicate with Him.

Jewish people also offer informal prayers where they silently communicate with God. During these prayers, Jews can be thankful for life, or they could ask God to assist them with anything they need help with at the time. Jewish people can also perform informal prayers just to convey their thoughts to God as well. These prayers can be performed at any time.

Informal Jewish prayers also take place when they wake up in the morning as a gesture of gratitude to God for waking them up. Jewish people also pray before eating food to bless their food and show gratitude to God.

There are special festival prayers that Jews perform during their holidays as well. Typically, Jewish women are exempted from performing prayers that are bound by the time this way.

The times of prayers are also revealed in the Siddur, and Jews refer to it for all the necessary details as well.

Where Do Jews Pray?

Jewish people can pray at both the home and at the synagogue. The synagogue is where formal prayer takes place in the congregation. This means that Jews get together in one place at the same time to offer their prayers. This is an act of strengthening the community both for the creature a sense of brotherhood and to show unity in the eyes of God.

Many Jews also do not regularly visit the synagogue for congregational prayers. They perform the three daily prayers at home and sometimes at the synagogue when they feel the need.

What Kinds Of Prayers Do They Have?

The prayers for Jewish people often serve different purposes. Jewish people mainly pray for thankfulness, praises of God, and to ask God for things like peace and happiness, or even material things which the people need.

Other than that, Jewish people have public prayers and private prayers. Public prayer is performed in a synagogue as part of a congregation. It cements people as part of the Jewish community and shows unity in the eyes of God as well. Private prayer is often performed at home, where the channel between the Jewish person and God is exclusive, and they can be more expressive in their prayer.

What Do Jews Accomplish When They Pray?

Jews are set to accomplish God’s favor and immense spiritual enlightenment when they pray. When they pray, they are actually opening up channels of communication with God Himself, who will hear the prayers and answer them in favor of the person who is praying.

Other than that, congregational prayers can strengthen communities. One of the goals of offering daily prayers is achieving a sense of community that is full of Jewish values and where people seek the assistance of God wherever possible. The community stands as one in the eyes of God, and they believe that their unity will incur God’s favor on all of them together.

The prayers also strengthen the bond that the people in the Jewish community have with one another. Congregational prayers help bring the community together, so they inculcate empathy and love of their brethren in one another.

The prayers also help Jewish people remember God’s presence and ease their minds with faith when it is needed. If they ever get too attached to worldly concerns, the prayers can bring them back to the enlightenment of their soul.

Jewish people pray and it is a fundamental pillar of their belief. The prayer is intended to strengthen their relationship with God and help in improving their faith. The prayers also help the people improve as a community and be amongst the pious ones in the eyes of God.