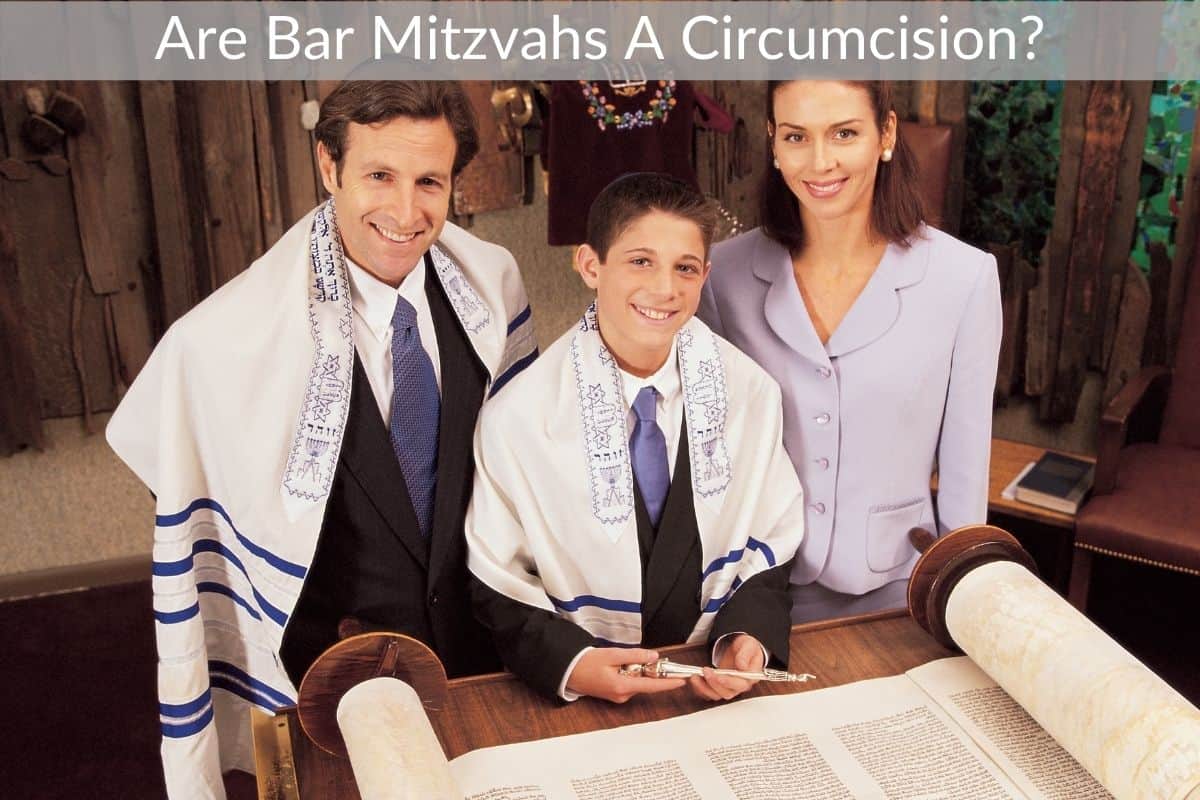 Jewish culture takes pride in their traditions. One tradition, the Bar Mitzvah, is popular in many Jewish congregations.

This ritual which involves praying, reading and chanting from the law, and a party afterwards, is a celebration of young children entering adulthood and becoming responsible members of their synagogue.

Because of the fact that this ceremony is for young boys, one may ask if a Bar Mitzvah is a circumcision.

A Bar Mitzvah is not a circumcision but rather a ceremony in the Jewish synagogue involving reading from the Torah, chanting the Haftarah, and praying. This tradition symbolizes the children becoming responsible adults.

The Jewish ritual of a Bar Mitzvah doesn’t include or have anything to do with circumcision. It is simply a ceremony marking the transitioning of the young child into adulthood showing they are now responsible for their own actions.

Plus, girls can also have one of these ceremonies called a Bat Mitzvah. This article will explain a little more about what a Bar Mitzvah is and if you need to be circumcised to be a Bar Mitzvah.

Usually a Jewsih child is circumcised a few days after birth. So this practice is not part of a Bar Mitzvah ceremony.

Do You Have To Be Circumcised To Be A Bar Mitzvah?

Jewish laws have certain requirements that should be followed when it comes to traditions and rituals. You may be wondering if a Bar Mitzvah has to be circumcised to have their ceremony.

There aren’t really any qualifications to have a Bar MItzvah except for an age requirement of the child being 12 or 13. If an uncircumcised boy wants a Bar Mitzvah, he can. It is then his choice to become circumcised since he is now responsible for his own actions.

The article, If a Jew has not been circumcised, can he have a Barmitzvah?…ask the rabbi, makes the following statements about Bar Mitzvahs and circumcision saying that,

“It indicates that not only the soul but the body too is part of our religion…If a boy has not been circumcised he should have the operation when he becomes an adult. However, even without a circumcision he is still a Jew and can have a Bar-Mitzvah.”

According to Jewish law, all boys should be circumcised. Newborn Jewish boys are circumcised a few days after they are born and so when they get older they will be able to have a Bar Mitzvah.

Still, it is said that you can have a Bar MItzvah if you are not circumcised and can choose whether or not to have it done afterwards.

What Is The Main Purpose Of A Bar Mitzvah?

A Bar Mitzvah is many things. It is a Jewsih tradition, ceremony, and celebration. But what is the main purpose of a Bar Mitzvah?

The main purpose of a Bar Mitzvah is to recognize that a Jewish child is transitioning into an adult. Everything from the ceremony to the party afterwards is a celebration of the young Jew becoming a member of the Jewish community and taking responsibilities.

According to Why Is a Bar Mitzvah So Important?, “…The Bar/Bat Mitzvah is an official recognition of the transition of a child into an adult. It’s a touching moment for the family whose little boy or girl is growing up, and it’s also a recognition of the responsibilities that the individual being celebrated takes on as an adult. They have responsibilities as adults and as grown individuals in their faith.”

When a Jewsih boy (or girl) reaches the age of 13 (sometimes 12 for girls), they can choose to have a Bar (Bat) Mitzvah ceremony. This symbolizes them becoming a part of the Jewish community and transitioning into adults.

The family of the young Jew is proud when their child goes through the ceremony since it is showing them becoming a responsible part of the congregation.

What Is Done At A Bar Mitzvah?

So, what is done at a Bar Mitzvah?

A Bar Mitzvah involves a ceremony where the young Jew reads from the Torah and chants the Haftarah. There is praying for the child and then after the service a big party is thrown to celebrate the accomplishment.

Rites of passage is an article on the meaning of a Bar Mitzvah. In this article they explain,

“Before his 13th birthday, a Jewish boy will attend lessons, usually at the synagogue, in Hebrew and in how to read the Torah aloud. On the Sabbath nearest to his 13th birthday, the boy will become Bar Mitzvah. During the Sabbath service, the boy will read aloud part of the Torah or a section of the Prophets. He will wear the tefillin for the first time. The Rabbi will address part of his talk to the boy and the boy might give a talk to the rest of the assembly. The boy’s father will then recite a prayer of thanks for his son’s coming of age. After the service there will usually be a party to celebrate the Bar Mitzvah.”

All of these are done at a Bar Mitzvah ceremony. Everything from the praying, reading, and chanting, down to the wardrobe and celebration is done for every young Jew participating in the ritual. Some things may vary according to the Jewish congregation the child is a part of, but for the most part, a Bar Mitzvah is done this way.

Bar Mitzvahs are very important for Jews. Once their child reaches age 13 they have a ceremony marking the transition into adulthood. Circumcision is not part of the ceremony. That title goes to another Jewish ritual called the Brit Milah. A Jewish boys circumcision takes place a few days after he is born. However, It is said that a Jewish boy should be circumcised to be a Bar Mitzvah. The main purpose of a Bar Mitzvah is to symbolize the transitioning of the young child into adulthood. It shows them becoming a part of the Jewish community and talking on repsibelties. There is a ceremony with praying, reading, adn chanting where the family of th young jew is especially proud of their son becoming responsible for his own actions. Jewish culture has many traditions they follow, one being the Bar Mitzvah. Circumcision is not part of a Bar Mitzvah ceremony.