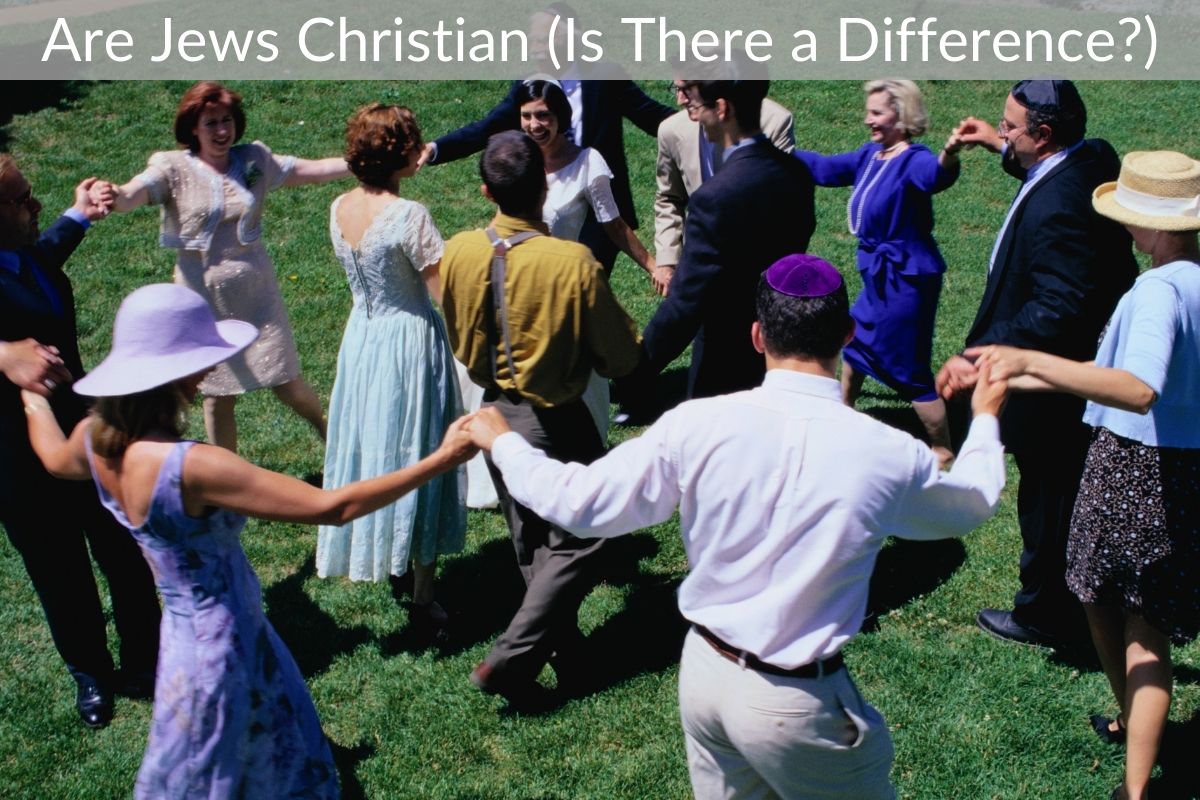 Whether Jews are Christians is a common question that has many people confused. And it’s a valid question because the two religions share a lot of history, teachings, and beliefs.

While the question of whether Jews and Christians are the same is simple, the truth is a little bit more complicated.

Judaism is the religion that formed the foundation of Christianity. Jesus, who is regarded by Christians as the Son of God, was Jewish. But while the two religions share many common features, there are also many differences. Some of which I will cover briefly in this article.

The primary difference between Jews and Christians is that Christians believe Jesus is the Son of God who was sent on earth to be the Messiah and savior of mankind. Jews, on the other hand, do not consider Jesus as a divine being.

Jesus is not part of any Jewish theology, so for the Jews, any holiday connected with the life and death of Jesus is not celebrated.

So the Jews don’t observe Christmas, Easter, Palm Sunday, Lent, and so on.

Judaism is one of the oldest religions in the world. It dates back as far as 2000 years BC and is based on the covenantal relationship between God and Abraham. The Christian Bible and the Jewish Torah both have an account of this convent and trace Abraham’s steps from the time God first called Abraham to leave his home and follow Him.

God promised Abraham to make him the Father of a great nation and that one day, his descendants would inherit the entire land of Canaan (modern-day Lebanon, Israel, Palestine, Northwestern Jordan, and certain parts of Western Syria).

God’s plan for His chosen people was documented throughout the Old Testament, featuring notable Israelite heroes and prophets like Moses, Joseph, David, Isaiah, and Jeremiah. The account of the people of Israel is meant to show that God was undoing the effects of the fall of man( the sin Adam and Eve committed in the garden of Eden, which led to God throwing them out of the garden.

The key elements of the old testament are:

Through the laws of Moses (as they are called), the foundations of Judaism practices and beliefs were born. The Jewish Bible- The Torah still has some of these old laws, which include;

In total, the Torah has 613 commandments that modern-day Jews follow, and these include the famous 10 commandments (you shall not steal, murder, envy your neighbor’s house, wife, etc.)

The old testament also documents how the Israelites struggled with obeying God. Although they took possession of the land of Canaan, they continued to disobey God’s commands. In anger, God exiled the Israelites to Babylon.

During this time of exile, God sent many prophets (including Jeremiah and Isaiah) who warned the people of their sin and tried to remind them of God’s promises. They also promised the exiles that they would not be in captivity forever as God would rescue them.

This is where the promise of a messiah (or anointed one) comes in. The Messiah would rescue God’s people and fulfill the promises God has made. The Old Testament ends with Israel waiting for the Messiah to come.

So up to this point, Christians and Jews are pretty much in agreement.

Christianity and the New Testament

The Christian Bible picks off where the old testament and the Torah left. This part of the Bible is an account of a savior born by a virgin in the city of Bethlehem. Jesus had been on the earth for a total of 33 years, and he performed miracles and taught many of the same principles found in the old testament.

His role was to serve as a sacrifice for the sin of man. And after his 33 years are up, he is crucified on the cross by his fellow Jews. Jesus rises from the dead 3 days later and ascends into heaven. Christians observe Easter in celebration of the death and resurrection of Jesus.

The rest of the new testament follows an account of Jesus’ disciples and other prominent teachers during the time Rome had conquered the land.

Christians believe that the old and new Testaments feed into each other. The story of the salvation of the Israelites and the rest of the world is completed when Jesus dies and resurrects.

What do Jews and Christians Have in Common?

As we’ve stated before, there are a few common things that Jews and Christians share. We’ve briefly listed some of them below:

What are the main differences between Jews and Christians?

There are many things different between Judaism and Christianity, the most significant by far being the role of Jesus and consequently understanding how God is working out His promises through Jesus.

Jews don’t accept Jesus as the promised Messiah; in fact, arguments against his role began during Jesus’ lifetime and continue today. Jews believe that the promised Messiah will be a human who will restore the physical kingdom of Israel, rebuild the temple in Jerusalem and bring earthly peace.

In Christianity, Jesus is the Son of God who came from heaven and took the form of man to save believers from their sins. Jesus has already fulfilled God’s promises and has ushered in the way to a new relationship with God by grace.

Jews, on the other hand, dispute this. Some view him as merely a Jewish teacher and the founder of Christianity, but not a savior.

Jews and Christians also differ when it comes to the religious significance of the city of Jerusalem. Jews place an enormous amount of importance. The Temple Mount in Jerusalem is one of the most sacred sites in Judaism, mainly due to the temples built by Solomon (David’s son) once stood there. Jewish people face Jerusalem when they pray.

On the other hand, Christians recognize the religious importance of Jerusalem because that is where Jesus lived, ministered, was crucified, and resurrected. But it is not treated as a sacred part of the religion like the Jews do.

Lastly, the Jews use the Star of David as their religious symbol. At the same time, Christians place significance on the cross, which represents the death and resurrection of Jesus.

There are some critical differences between Jews and Christians. While the foundations might be similar, the two have evolved to become two completely different religions with different theologies, practices, and belief systems.

link to Are Jews A Race Or Religion?

Alcohol is considered taboo in many religions because of its intoxicating effects on the body and mind. When answering the questions, ‘do Jews drink alcohol?’ and ‘are Jews allowed to drink...