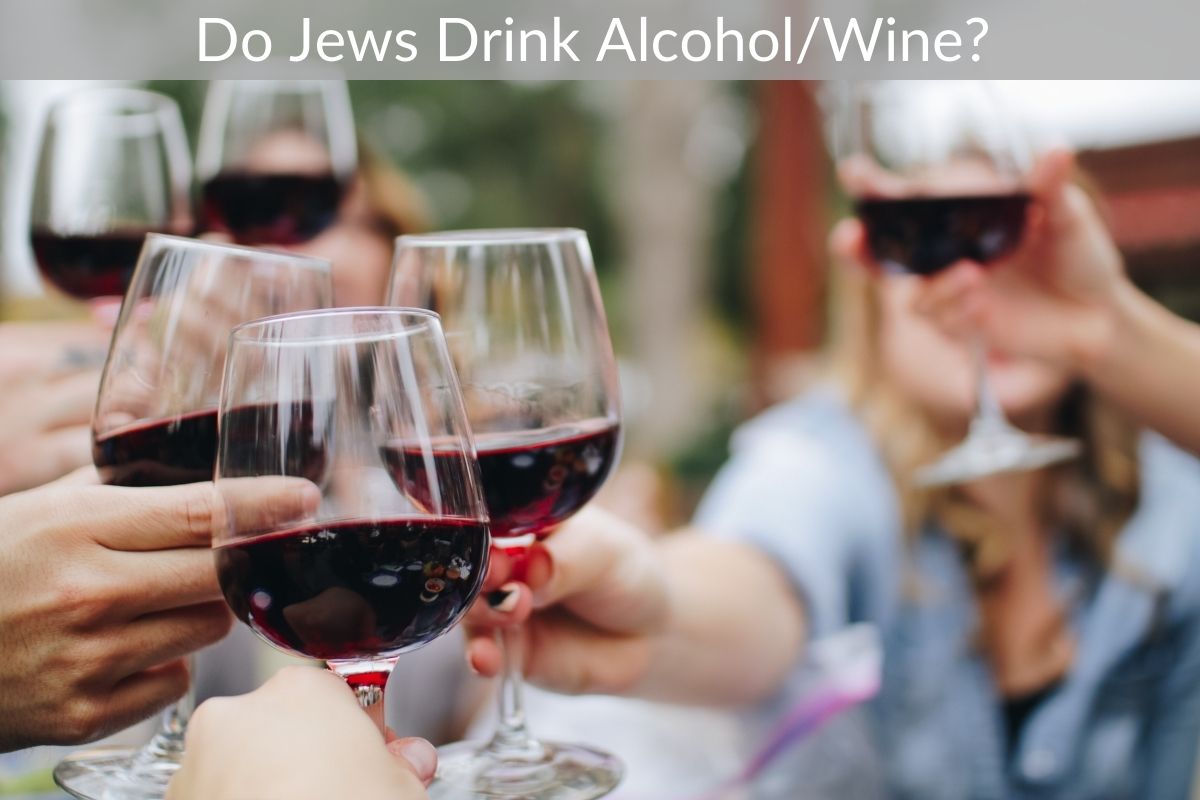 Alcohol is considered taboo in many religions because of its intoxicating effects on the body and mind.

When answering the questions, ‘do Jews drink alcohol?’ and ‘are Jews allowed to drink wine?’, it is optimal to do some research about what the scripture says before reaching a definitive conclusion.

Jews are allowed to drink alcohol and, more specifically, wine on many occasions such as Shabbat, Jewish holidays, and Pidyon Haben. While it is considered harmful and addictive, it is allowed for celebrations and other significant events like a Jewish child’s circumcision.

Alcohol forms an integral part in many cultures, and looking past its harmful effects and potential for dependency, it is advantageous in social situations as it inhibits anxiety in individuals.

Are Jews Allowed to Drink Wine and Other Alcohols?

Judaism permits the use of alcohol in the Scriptures but stresses the importance of moderation, which is essential not to fall off the wagon when consuming addictive drugs like alcohol.

In case you didn’t know, alcohol is considered a drug.

Psalms 104:15 speaks about the wine in a positive light and describes it as a beverage that ‘gladdens the human heart.’

Wine has been an essential part of Jewish culture and tradition, and special blessings are delivered before and after its consumption.

Kiddush is a ritual practice in which declarations are made of the holiness of Shabbat, with wine being consumed at various points of the festival.

Wine is the primary choice of alcohol for many of these events, but under some circumstances, Jews may also consume other alcoholic beverages at different events.

Alcohol is widely regarded as a source of pleasure and pain, which is why Jews are advised to proceed with caution, as you can easily find yourself at the bottom of a bottle if you don’t exercise a modicum of self-control.

While wine is undoubtedly used on many occasions and during several rituals, it is not necessary; those who cannot consume it due to medical reasons should opt for non-intoxicating alternatives for rituals like the Passover Seder.

Proverbs 23:31-32 states that we should approach red wine with caution because the smoothness of its flavor conceals its deadly snake-like bite, and its warps the functioning of the mind.

Judaism generally supports the notion of clear thinking and having your wits about you, which is why states of drunkenness are seriously frowned upon, and drunkards shunned from society.

So, it is acceptable in moderation and small doses for rituals and other events, but drunkenness is regarded as evil.

Jews value the importance of behaving correctly and responsibly, which is why drinking excessively is seen as going against the status quo.

A drunkard is commonly called a shikur and is usually kept away from the community and prohibited from religious functions.

To summarize, alcohol and wine are allowed in moderation and by exercising self-control.

Dangers of Alcoholism in Judaism

Judaism holds Jews responsible for keeping their health in check and treating themselves as individuals whose health should be a primary concern.

This is reinforced in modern days with our deep understanding of the detrimental effects of alcohol, such as the potential for addiction and other destructive behaviors, which Jews of the olden era were hardly aware of.

Alcohol can be costly, especially if one is addicted. It can lead to self-sabotaging behaviors such as alienating friends, family, and others, which is why it should be treated as a significant problem so that community can offer help to those suffering from the consequences of its frequent use.

Those struggling for recovery require help from their Jewish brothers and sisters not to feel condemned and disregarded by their community, which can worsen their condition and spiral into a chain of consequences for everyone around them.

Alcohol can quickly become a crutch where people become severely dependent on the substance, causing them to use it as escapism to run from their problems.

Many Jews may find they become stuck in this sinful trap, where getting drunk becomes a vicious cycle of avoiding responsibilities and creating a bottomless pit for themselves, which can become increasingly difficult to dig out of.

Jews are prohibited from praying or fasting under the influence and must sober up entirely before they are ‘clean’ enough for religious practices.

A fine line is easily crossed, which is why the sense of community must be strong so that Jewish brothers and sisters can lend a helping hand to those in need without judgment.

Alcohol in The Modern Day

Alcohol has the potential to be a harmful substance, that much is known, but proper moderation is undoubtedly possible.

Your inhibitions are lowered when under the influence, and alcohol can be a double-edged sword, fueling the need to feel more intoxicated.

However, it is not prohibited in Judaism; therefore, individuals should master self-control if they do not want to give it up completely.

Alcohol is often painted in a bad light because of its side effects, but what about its positive effects?

Many people form lifelong friendships using alcohol as a tool to improve their social lives.

When inhibitions are lowered, people are less guarded and open to happily interact with all sorts of people, leaving any biases they might hold aside.

People of society often make the mistake of thinking in black and white categories, where it’s either this or that, with no space in between.

There’s a reason alcohol is the most used drug in the world, and it is because it has a host of positive effects that people don’t want to admit. Many people fail to see past the internalized taboos they have accepted.

Strict Jews may steer clear of alcohol for various reasons, and they are not wrong to do so, but to enforce your ideals on others is not the right course of action.

Many practicing Jews who are religious and peoples of faith may tend to have a few extra cups of wine, and it is ultimately their own decision and burden to bear.

It is of the utmost importance that people form their opinions based on proper research so that they do not regurgitate others’ opinions and live a life based on what other people have told them.

This is why questions like ‘do Jews drink alcohol?’ and ‘are Jews allowed to drink wine?’ are essential because they encourage conversations that can inform people of the right course of action to decide what’s suitable for their particular situations.