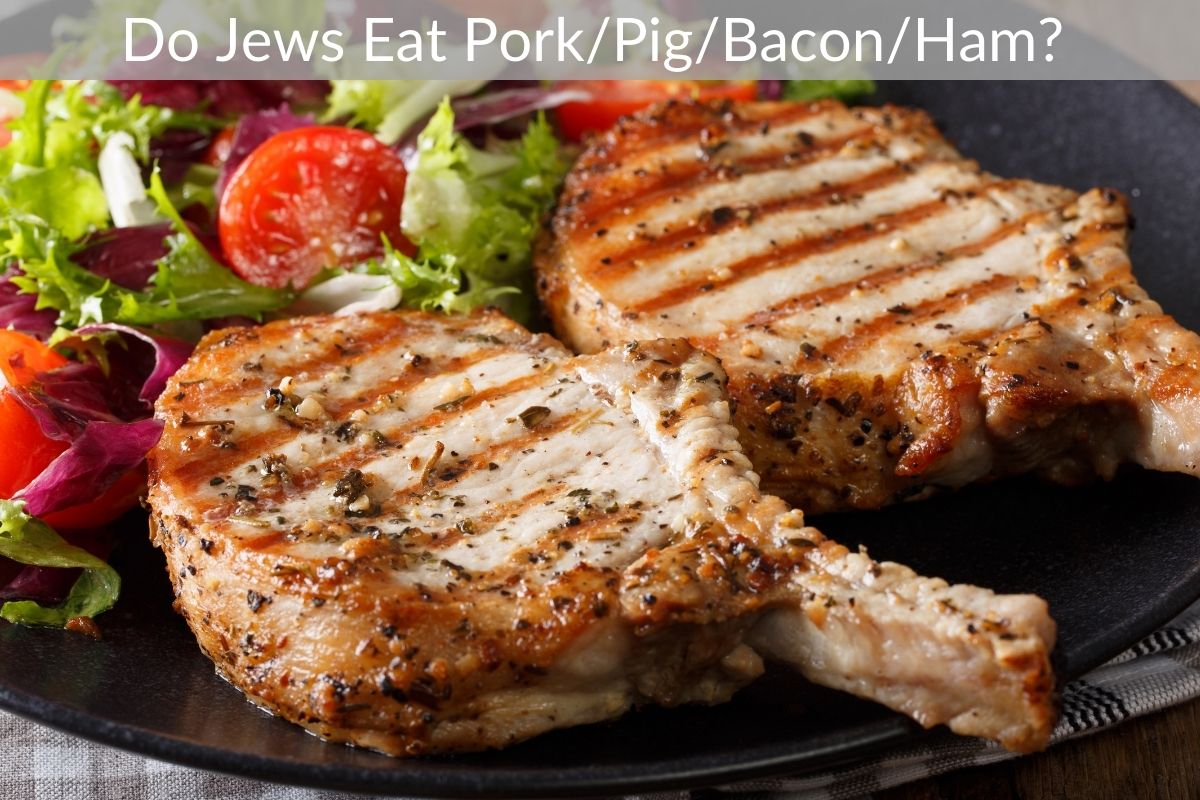 Jews don’t eat pork or any other Pig products traditionally. However, there are some unobservant Jews who may eat bacon or pork.

Essentially, the Abrahamic tradition doesn’t allow for the ingestion of pork, pig, ham, bacon, or any other pig products. However, that doesn’t necessarily mean that the Jews, even the most practicing ones, will not eat pork.

There are many Jews who indulge in eating these products even though they are not allowed in the Judaic traditions.

The Torah or the Old Testament contains passages that inform the Jews about the dietary laws that must prevail. There are passages in Leviticus that inform people about the animals that Jews are allowed to eat. It first informs that the animals that have divided or partitioned hooves and chew their cud can be eaten. Animals of this sort are cows, sheep, goats, and deer. The book then describes animals that may meet one but not the other requirement.

It described how these animals are not prohibited for consumption due to not meeting both requirements. There is no elaboration on why these animals are prohibited. However, other passages prohibit pigs in particular. Pigs are described in this section (Lev. 11:7-8) as disallowed because even though they have cloven hoofs, they don’t chew their cud. Consumption of pork is also banned again in Deuteronomy (14:8).

Many Jews think that if they have accidentally eaten pork, they will have to seek forgiveness. That being said. Not all Jews practice an aversion to pork or pig. Even though Jews are prohibited by faith not to eat pork, many of them still do. Israel is considered the Jewish faith’s epicenter and has many restaurants where pork is served openly.

Can Pork Ever Be Kosher?

Pork cannot be Kosher as it doesn’t follow the rules laid down by the Old Testament. Pigs do not eat their cud, so they cannot be termed Kosher. Other meats that aren’t Kosher are shellfish and insect eggs, which means eating them is not allowed for those in the faith.

Why Do Jews Eat Pork?

Even though it’s forbidden, there are many Jews who still eat pork. The reason behind this could be the ever-present globalization present in the world. The likes of bacon, ham, and other pig products are very readily available in countries like America and the European Union. Thus, the easier accessibility could be why the Jews who aren’t too religious may indulge in pork.

Furthermore, Jews are not a monolith which means that not all of them will follow the religious laws to a tee. Instead, they may have grown a preference for pork and find nothing wrong in indulging in it.

Many people who know more about pig consumption also think that the pig is a financially and ecologically smart animal to feast on as you can eat all of it. Thus, many next-generation Jews in America don’t feel guilty when eating pork, ham, or bacon.

The Old Testament states that Jews shouldn’t eat pork because pigs don’t chew their cud. However, the books also fail to inform why not chewing their cud is so bad. Many rabbis and Jewish scholars believe that pigs are prohibited because they live in their filth and are not “pure.” Many Islamic scholars also cite this reason for the prohibition of pork in the Muslim faith.

Many people believe that not eating pork is a way to set Jews apart. It has been a part of the Jewish identity to not eat bacon or any pig product for a long time. Many scholars believe that following this commandment helps to create self-control.

A more common and persuasive argument was made in the Middle Ages by Moses Maimonides. He stated that the Torah prohibits the consumption of swine, pork, and pigs as they are disgusting and dirty creatures. There are many references to the sentence “you are what you eat” in his argument.

Since pigs are dirty and like to remain in their filth, eating them leads you to live a life that’s also disgusting and dirty. You might be filthier “than any cesspool” (Guide for the Perplexed 3:48). He also cites the Talmud, which talks about how horrible the mouth of a swine is like that of the excrement itself.

The Jewish faith has never approved of the habits of a swine, and it’s the most common explanation of why it’s frowned upon by Jews to eat pork. Swine’s food habits are different from the many main domestic animals raised for food nowadays and even in ancient Israel. The animals are namely goats, cows, and sheep.

Pigs don’t follow the requirements of chewing the cud or grazing on grass. Additionally, they will also eat the waste of many kinds, including the fecal matter of other animals and even humans. They are sloppy and consume leftover trash. They are also slightly barbaric and will eat meat. They don’t even avoid human flesh or the meat of their own offspring. Moreover, Maimonides also signified other deplorable behavior by the swine, including resting in fecal matter and urine when it didn’t have mud to cover itself.

Furthermore, the Jewish faith also restricts the eating of any birds that may kill for food. The belief around this is that if you are to eat a bird with such cruel tendencies, you too will turn cruel.

Some jews eat pork and pig products in the modern age. However, the Abrahamic tradition states that they shouldn’t do so. Practicing Jews or those who hold the Torah in high esteem will generally not eat pork.

Not eating pork has been a part of the Jewish identity for many years, and there may be many reasons why some Jews eat pork while others don’t.

Pork and pig products can never be kosher regardless of how you treat them. However, ham is something that many people eat at Hanukkah, so pig consumption depends on the traditions you follow.