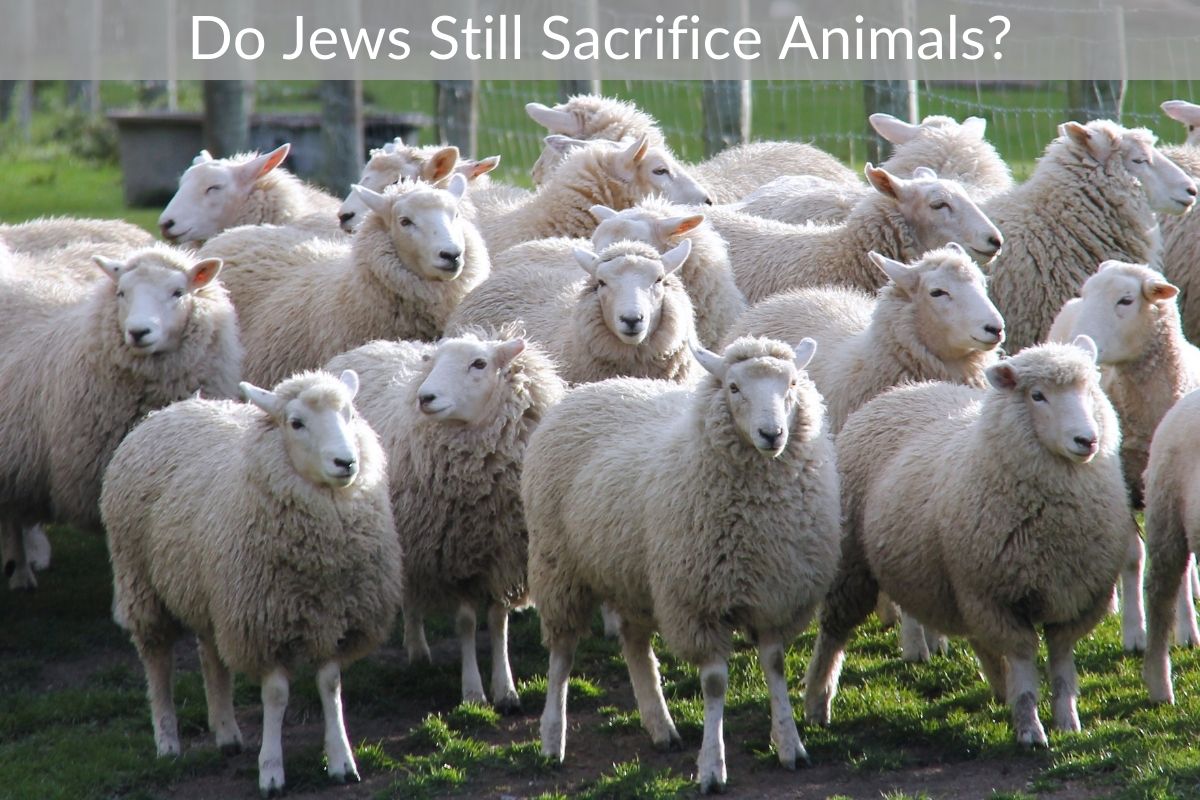 If you are trying to learn about the Jewish religion and whether they still offer animal sacrifices then you are in the right spot.

Currently Jews do not offer animals as sacrifices but many Jews would like to return to the practice and are hoping and praying for the day when they will be able to offer sacrifices again.

However, not all Jews are of the same mind in regards to sacrificing animals as was done in the past. For us to understand animal sacrifices and why it was even a thing for Jews in the past it’s important to look at some Jewish history and what they believe.

God instructed Moses on five different sacrifices he had to offer in a sanctuary. These included:

The “burnt offering” or olah was one of the voluntary sacrifices with a high sanctity, which was considered a standard offering. An animal, such as goat, was to be burned at the altar, except for the hide.

The “meal offering” or minchah was a sacrifice consisting of salt, frankincense, flour, and oil that was burned at the altar and then offered to the priest to consume.

The “sacrifice of well-being” or zevach sh’lamim was also a voluntary animal offering that Jewish people did at the time by choosing an animal from a herd to fulfill a promise.

The “sin offering” or chatat was declared an obligatory sacrifice, which was offered to compensate for accidental sins. A difference between this sacrifice and the others is how the animal’s blood is treated.

The “penalty offering” or asham is another obligatory sacrifice. It involves a ram of the person who had stolen property.

The History of the Sacrifice

History tells a tall tale of all the sacrifices that Jews once made. However, today, there are no known public sightings of animal sacrifices. In fact, a sacrifice hasn’t taken place since the 2nd Century C.E. Some Orthodox Jews found in Israel still follow the sacrifice ritual to pay tribute to the Temple Mount, but it’s not the same.

One can find this ancient rite in the Book of Exodus, in which God gives instructions to Moses on how to celebrate the Passover.

God said, “Speak ye unto all the congregation of Israel. In the 10th day of this month, they shall take to them every man a lamb, according to their fathers’ houses, a lamb for a household.”

People could use either a sheep or a goat for a sacrifice, and it needed to be without any blemish. God further said, “Then the whole assembly of the congregation of Israel shall kill it at twilight. 7 And they shall take some of the blood and put it on the two doorposts and on the lintel of the houses where they eat it. 8 Then they shall eat the flesh on that night; roasted in fire, with unleavened bread and with bitter herbs they shall eat it.” (Exodus 12:3–8)

There’s no evidence of how this ritual was carried out the first time, but The People of the Book (Mishneh 200 C.E.) tells how it was practiced in the period of the Second Temple.

Jewish families migrated to Jerusalem. After arrival, they purchased an animal for the sacrifice and then waited for the Passover to arrive. On the eve of the Passover, one member from each family takes their sacrifice to the Temple. When the gates were opened, the members lined with the priests in the courtyard, and then mass slaughter would begin.

Even though the Temple was the size of 15 football fields, it still wasn’t big enough for all the sacrifices to take place at a time, which was why it was repeated three times.

The family member would hand their sheep or goat to the priest, who would kill it and then collect its blood carefully in a bowl. After filling the bowl, it was transferred from priest to priest until it reached the high priest standing at the altar, who would then douse it in blood.

Once the blood bowl ritual was complete, the priest would hand the dead animal back to the family member. They would then hang it on a hook; the innards and skin were removed and burned at the altar. After cleaning the animal completely, the owner would take it back to the family, where it was roasted on a brand and consumed on the festival night.

Why Did the Sacrifices Stop?

The sacrifices were halted in 70 C.E. when the Roman army destroyed the Temple.

However, there were some Jews left who wanted to continue the tradition. Therefore, the practice was resumed during 132-135 C.E., i.e., the period of the Jewish War. Alas, it ended permanently because the Jews lost the war. There were still some communities that tried to continue the sacrifices after a while.

As mentioned earlier, the Torah commands a sacrifice cannot be made in any place. It can only be done where God commands it. The last place was the Temple, but now that it has been destroyed, you will hardly see any sacrifices made before the Passover.

Orthodox Jews believe they will renew the sacrifices once the Mashiach arrives. Others think it is better to rebuild the Temple and reinstitute the sacrifices rather than wait for him. No matter which way is chosen, one thing that will remain constant is the regular order that needs to be followed.

The question that now remains is whether the Jews want to resume the tradition of sacrifices or not?

Orthodox Jews do! They often pray in their daily services to help them restore the Temple so that all their old rituals can be resumed.

In conclusion, while Jews no longer practice the sacrifice ritual, they do hope it resumes as soon as possible.

Since the 1968 Passover, Jewish groups in the US who believe in the Apocalypse and share an eagerness for it have been trying to continue the sacrifice ritual with sheep and goats on the Temple. However, The Israeli government has turned them away repeatedly in fear that it might start a holy war.