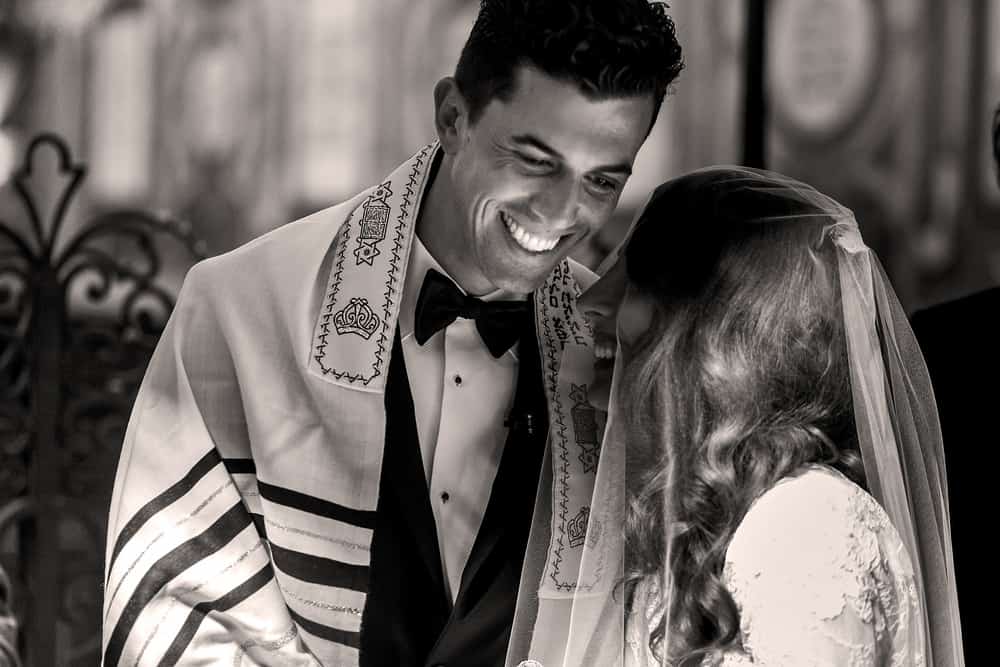 If you’ve ever been to a Jewish wedding ceremony, you probably noticed that there was a deep level of ritual and tradition involved. Across the world, Jewish wedding traditions continue to run strong, as unique as the people who celebrate them. Jewish weddings are often a combination of both halacha (law) and custom, but both are filled with time-honored traditions meant to celebrate love and enhance shalom bayit, or marital harmony.

A time for rituals and symbolism, the Jewish wedding is a time to celebrate the beauty of love and the strength of a budding relationship, not to mention the couple’s commitments to one another and the mitzvahs of the Jewish faith. Here’s what to expect from these ceremonies and the Jewish wedding traditions therein:

On the Wedding Day

Many of the age-old Jewish traditions are easiest to see during the wedding ceremony. Most notably, the ceremony takes place under a canopy called a chuppah. This chuppah provides a symbol of the marital home the new couple will build together. While the “roof” of the chuppah is covered, it remains open on all four sides, which symbolizes the way that the biblical characters Sarah and Abraham kept their tent open to welcome visitors and extend their hospitality.

Beyond the chuppah, a large part of the wedding ceremony is the cups of wine. The couple drinks two cups of wine during a Jewish wedding ceremony. They drink the first cup as the rabbi recites the betrothal blessing. They wait to drink the second until the marriage blessing. In Jewish tradition, the betrothal and marriage are two separate acts. In the ceremony, the reading of the marriage contract separates the two parts. During ancient times, the betrothal and wedding would take place months apart, while the couple had an opportunity to form an emotional bond before living together as man and wife.
Finally, the ceremony moves on to the giving of the ring and the reading of the marriage contract. Jewish tradition states that the ring should be plain gold, without stones or detail, which symbolizes a simple marriage of purity and beauty. Technically, the marriage becomes official when the husband provides the ring. While many modern Jewish couples exchange rings, during the ceremony, only the bride’s ring is used. Tradition considers its precious metal value as part of the husband’s pledge to provide for his new bride. The marriage contract and blessing

After the exchange of rings, the rabbi reads the ketubah, or marriage contract. The contract is then signed by two witnesses and considered legally binding. The ketubah outlines the husband’s promise to his wife to feed, clothe, and care for her needs. It stays in her possession throughout the marriage.
Following this, the rabbi or even a member of the family recites the Seven Blessings (Sheva Brachot), or marriage blessings. The couple drinks the second glass of wine, followed by the breaking of the glass. The groom places a wrapped wine glass on the floor and stomps on it until it breaks. The broken glass represents grief over the destruction of the Temple in Israel. However, some joke that it’s the last time the man will get to put his foot down.
Once these rituals are over, the couple is married, and the party begins.

After the wedding ceremony, the couple and their friends and family move on to the seudah. This is the festive meal following any celebration. The guests eat and drink, and the Birkat Hamazon, or Grace After Meals, recited. Someone also repeats the Sheva Brachot. Then, like most weddings, the couple, family, and guests dance.
For the week after the wedding, friends and family of the bride and groom will host meals to honor their union and further celebrate the big event. Many will recite the marriage blessing in their honor at the meal.
Across the world, Jewish weddings stand out as some of the most special and unique celebrations. Dedicated to love, commitment, and family, these emotional and ritual-dense days are memorable events.