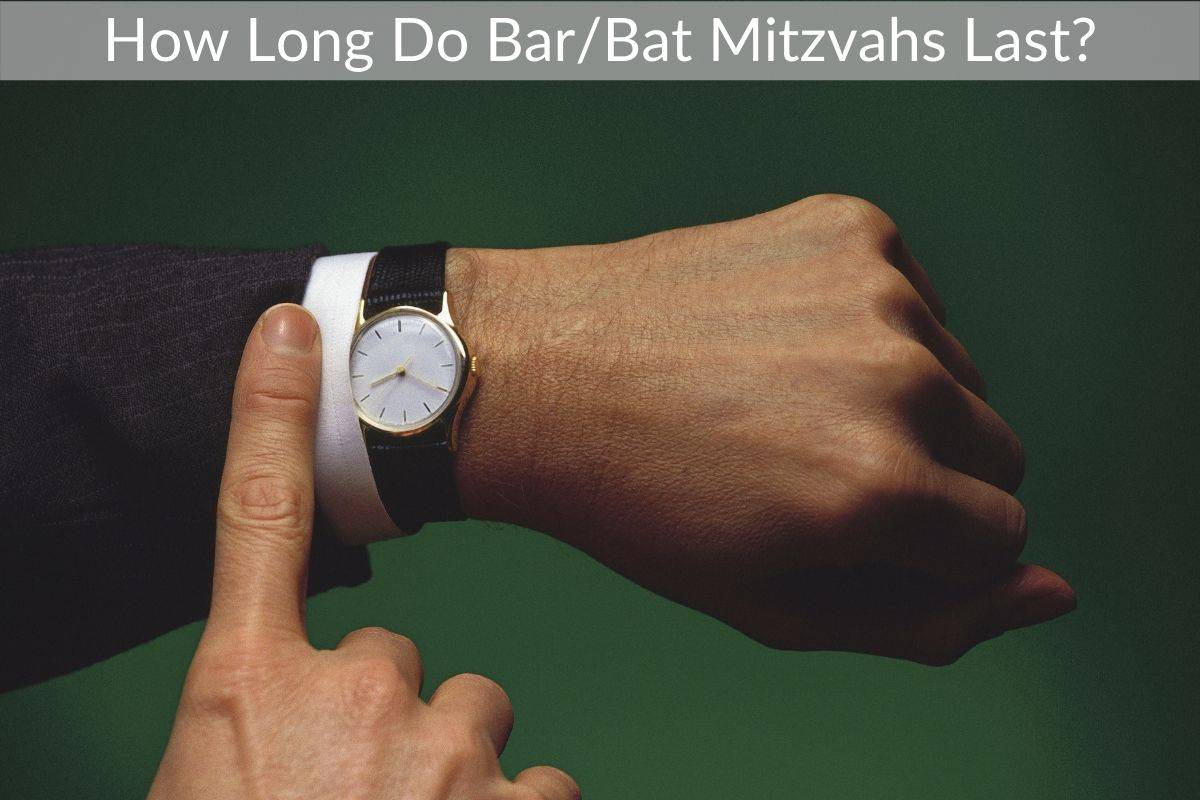 A child who is becoming bar/bat mitzvah will participate in the Shabbat (Saturday) service that is typically the closest to their twelfth or thirteenth birthday. The child will usually read or chant in Hebrew from the Torah and from the prayer book.

In some synagogues the children will give a speech about the Torah portion that was assigned that week or where they will speak about their Hebrew names and thank all of those who have helped them to reach this landmark occasion.

If you are going to a bar/bay mitzvah for the first time you might be wondering how long it will last.

How long a bar/bat mitzvah service lasts depends on the synagogue. You can expect the service to last about one and a half to two hours long. After the service many families will have a Kiddush, or a light meal in the synagogue’s social hall or another designated area.

The meal is called a Kiddush because of the blessing of the wine which gets said before the meal. Oftentimes a party to celebrate the bar/bat mitzvah will follow in the evening.

Traditional Jews will not start the party until after sunset as they are not permitted to play music or drive on the Shabbat.

A bar/bat mitzvah party will typically last several hours, similar to that of a wedding reception. There will be the family introduction and then the introduction of the child who is being celebrated.

The bread is then sliced and passed around to be shared. After sharing the challah bread the meal will then be served.

After the special dance is when the dancing begins. Oftentimes the horah will be danced. This is a dance where everyone holds hands and dances around in a circle.

The guest of honor will then be lifted up into the air while sitting in a chair, this symbolizes reaching a higher level spiritually as well as showing that we need the support of others in order to get things accomplished.

With all of these traditions it is easy to see how a bar/bat mitzvah celebrations can last several hours and that is after the Shabbat service.

To see the most popular gifts for a bar/bar mitzvah just click here.

What Time Of Day Is A Bar/Bat Mitzvah Held?

Typically, the bar/bat mitzvah service will take place on the Shabbat during the normal service at the synagogue then the party will start after sundown. In recent years people have been celebrating their bar/bat mitzvah on either Monday or Thursday’s when the Torah is publicly read.

If the bar/bat mitzvah is being celebrated on a Monday or Thursday then then that means more family and friends who live farther away can attend as they would not have to worry about driving on the Shabbat. If the party and the ceremony are on different days there will typically be a light meal after the ceremony.

Why Is 13 The Age For Bar Mitzvah?

The Mishnah is the first written collection of the oral Torah. According to the Mishnah thirteen is the age at which a child is old enough to observe the commandments of the Torah.

What Happens At A Bar/Bat Mitzvah?

A bar/bat mitzvah ceremony and celebration are two different events that take place when a child comes of age, each part has its own traditions.

On the Shabbat closest to the child’s thirteenth birthday the child will attend service at the synagogue. He/she will then participate in the service by reading a section of the Torah or a section of the Prophets in Hebrew.

The rabbi might take part of the service to address the child and the child might respond. Then the father typically will address the congregation and offer a prayer of thanks for his child coming of age.

After that is the lighting of the candles. The first candle that is lit is in remembrance of family members who have passed away, at this time the guest-of-honor will often recite a poem or a few things about the members of his/her family who have passed.

After the lighting of the candles, the eldest member of the family will then recite the Ha-motzi, a blessing and prayer, over the Challah bread. The bread will then be sliced and passed around to be shared.

This is the start of the meal.

This special dance kicks off the dancing. Dancing is a large part of a bar/bat mitzvah celebration. The horah is a dance where everyone holds hands and dances around in a circle.

With all of these traditions that happen during the ceremony and the party it is easy to see why it lasts for so long.