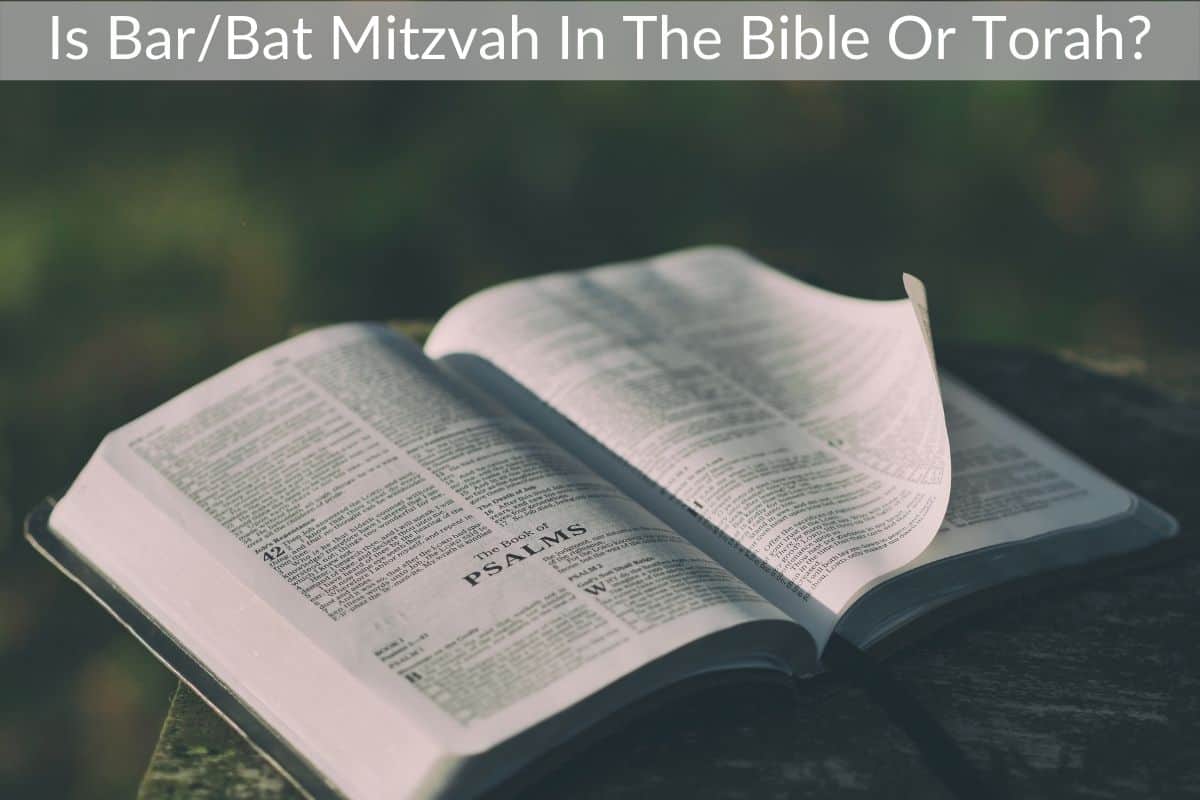 At this age is when they become accountable for their religious lives.

When talking about these celebrations many questions can come up.

The Bible does not mention Bar/Bat Mitzvah. The age 13 is mentioned in the Mishna, which is known as the Oral Torah. In the Mishna it states that 13 is the time when a person is obligated to follow the Torah’s Commandments.

“At five years old one should study the Scriptures, at ten years for the Mishna, at thirteen for the Commandments…”

The Talmud is the central text of Rabbinic Judaism and the primary source of Jewish law and theology. In the Talmud the term Bar Mitzvah is seen and means “one who is subject to the law.”

The Talmud does not mention the age 13.

The term Bar Mitzvah, where it is linked to the age 13 only goes back as far as the Middle Ages.

How Is The Torah Used In A Bar Mitzvah?

They are expected to practice ten to fifteen minutes a day outside of class. In these classes they will memorize hours of Scripture. Then they will recite and sing it in Hebrew.

During the Shabbat service after the child’s 13th birthday the child is called up during the service where they will usually read the final lines of the Torah portion for the service. After reading from the Torah the child will then usually give a speech where they will typically thank those who have helped them reach this point in their life.

After the child’s speech the parents usually give a short speech during the service. Then the rabbi might give a short sermon and bless the Bar or Bat Mitzvah before the service continues on.

What Is The Difference Between A Bat Mitzvah And Bat Chayil?

If you aren’t Jewish then the different traditions and phrases can get confusing. What’s the difference between them all?

Religiously there is no difference between a Bat Mitzvah and Bat Chayil. They have different meanings but are extremely similar in what actions they require of the young woman.

She will truly begin her journey as a Jewish adult, this does not mean that she is expected to be an adult. It simply means that she is beginning the journey into adulthood.

She is now accountable for her actions and is expected to follow the Commandments.

Bat Chayil means daughter of Valour, this term originates from King Solomon’s hymn “Eishet Chayil- A Woman of Valour”. The hymn describes a woman of valour as a woman who is capable, energetic, and righteous.

What Do You Say To A Bat Mitzvah Girl?

Are you struggling with what to write on a card that you are taking to a Bat Mitzvah celebration? Every birthday is an important birthday but the birthday when a girl becomes Bat Mitzvah is even more special.

This marks a huge milestone in her life. You can purchase a gift or give a monetary gift. Monetary gifts should be given in multiples of 18 but what should you say?

Here are a few things that you can write in the card or say that will go along with your gift. Mazel tov on your bat mitzvah! Mazel tov is a Jewish phrase which expresses congratulations. You can also write something like “thank you for inviting me to celebrate your Bat Mitzvah. Congratulations and many blessings in the years to come!”

Anything that you say that tells her how proud you are of her for reaching this milestone in her life would be a nice gesture. You can also tell her that you are so happy to be a part of this special day.

You can write or say how you are praying for joy and success for her in the years to come. You will want to make sure that you do not write anything embarrassing as these cards will be read by the family as well as the Bat Mitzvah.

How Much Money Do You Give At A Bat/Bar Mitzvah?

Gifts are expected when you are invited to a Bar/Bat Mitzvah. Not only is this the child’s 12 or 13th birthday but it is also when they have come of age in the Jewish religion.

This is a huge milestone for the child and should be celebrated as such.

Many people will give gifts such as religious items that can be used throughout the child’s life; menorahs, Shabbat candles and candlesticks, or a Mezuzah are all great gifts.

If you are a family of four then you can give anywhere between $144 and $288. If you are a friend of the child who is celebrating their Bar/Bat Mitzvah then three times chai is an acceptable amount (which would be $54).

Though I am certain that any gift would be appreciated whether it is in multiples of 18 or meets the “minimum” or not.