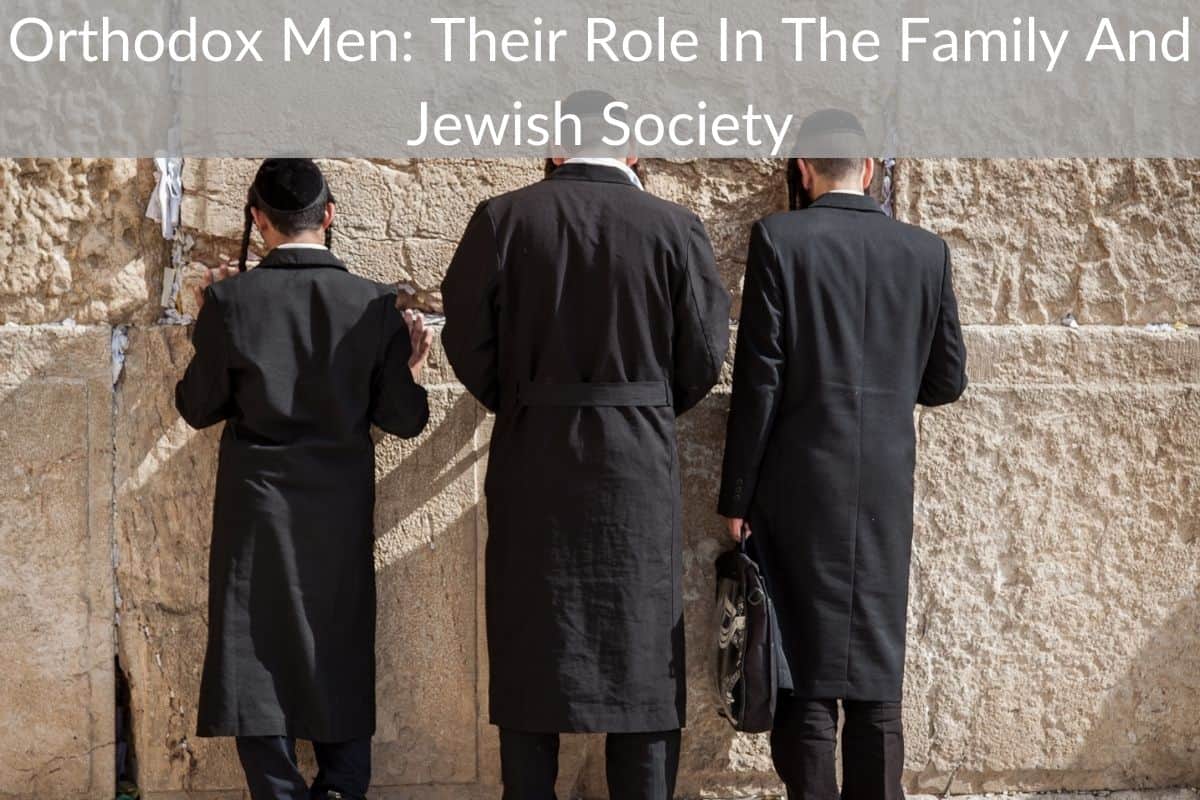 Understanding Orthodox men requires also understanding their role in their families and communities, and what their religious life requires of believers. An orthodox follower of any faith practices their religion with an unwavering adherence to its laws. Unlike more progressive streams of Jewish practice, Orthodox Jews recite prayers, attend synagogue regularly, and follow the strict dietary guidelines outlined by their faith to the letter.

And even within Orthodox Judaism, you’ll find several schools of thought when it comes to daily life and following halacha to the letter. The one thing all Orthodox men and women have in common is their belief that the Torah was divinely inspired. It is this key factor of belief that truly separates Orthodox Jews from more liberal streams. In the belief of Orthodox Jews, God revealed the Torah to Moses on Mount Sinai. Other matters of faith include the belief in the resurrection of the dead and the restoration of the Temple when the Messiah appears.

Along with strict adherence to the many laws and commandments of the written and oral Torah, Orthodox Jews seek to follow God’s law without seeking wealth or other ambitions in the secular world.

Orthodox Judaism doesn’t have a central authority or one school of thought. As mentioned, it’s the divine origin of the Torah and the belief of God’s promise of a Messiah that separates different Orthodox sects from others. In general, you’ll find two approaches to religious practice among Orthodox men: Haredi and Modern Orthodoxy.

The most conservative of the Orthodox groups, Haredi Jews include Hassidic, Litvak, Ashkenazi, and Sephardic sects. The origin of the term “Haredi” and its history is fascinating, as well. The term came in common use after the Holocaust, when many refugees came to the US. The term is Hebrew and references a phrase in Isaiah about one who “trembles” at the word of God. Haredi Jews often distinguish themselves from other Orthodox Jews, and the name indicates their desire to fulfill the letter of the law. Some people use the term “ultra-Orthodox” to refer to Haredi Jews. However, it is sometimes considered offensive.

While remaining faithful to the halacha and maintaining belief in God’s covenant with the Jews, Modern Orthodox men and women seek to work and relate within the secular world. Rather than disassociating themselves with other Jews, they seek to return Reform and non-practicing Jews to religious practice.

Also called “Centrist Orthodoxy,” Modern Orthodoxy promotes the concept of “Torah Umadda,” literally translated into “Torah and Science.” Rather than seeking to sequester themselves from the secular world, they feel they carry the spirit of Tikkun olan, to do good, into the secular world. Modern Orthodox Rabbi Saul Berman says that connecting with the secular world allows Jews to engage “in the Divine work of transforming the world to benefit humanity.”

The Place of Orthodox Men in Jewish Society​

The Conservative and Reform streams of Judaism comprise the majority of Jews in the world today. However, Orthodoxy or Traditional Judaism is a fast-growing movement. Modern Orthodoxy, in particular, places much importance on the State of Israel, and can often seem to be a political as well as religious position. Modern Orthodox Judaism dates back to the early 1800s and can range in practice that swings from Haredi to Conservative thought.

So, while adherence to halacha is a vital part of their religious lives, many Modern Orthodox men attend secular universities, participate in the sciences and commerce, and interact with the non-Jewish community.

The Growth of Orthodoxy

Despite its exhaustive requirements for religious observance, Orthodox Judaism represents a growing demographic. While only about 10 percent of American Jews claim Orthodox status, they tend to have large families. Only 21 percent of Israeli Jews are Orthodox, but again, they tend to be younger, have more children, and represent a growing population in both the US and Israel. And most Orthodox children remain Orthodox into adulthood.

Several movements have inspired Conservative and Reform Jews to return to a more literal translation of the halacha. And many Centrist Orthodox Jews are becoming more observant than ever since the Holocaust. While segregation of the sexes remains a part of Orthodox practice, modern times has seen more women in leadership roles in religious life within those segregations. While women are exempt from many of the religious duties to allow them more time for domestic obligations, many choose to participate in study and prayer in addition. So, where does this leave Orthodox men and their role in religious life?

The Duties of Orthodox Men in the Family

To better understand what motivates Orthodox men, it’s important to understand his obligations. These duties derive from the Torah and the laws outlining gender roles and marriage contracts. While many laud the concept of women expanding into leadership roles even within Orthodox circles, none of this exempts Orthodox men from their duties under the Torah.

Jewish life in many streams focuses on family life. The Torah dictates that a married couple must procreate by the tenants of their faith. While this puts pressure on women to have children, it also requires men to provide for them. By Judaic law, a husband owes his wife three things: food, clothing, and sex. Under Jewish law, men must provide their wives with a satisfactory sex life. The Torah requires him to focus his attention and affection on only her. In fact, the Talmud even dictates how often a man must provide this according to his profession.

The Torah directs that a man with a new wife may not go to war or away on business. Deuteronomy 24:5 says: “he shall be free at home one year, and bring happiness to his wife whom he has taken.” From such good advice are happy marriages forged.

Other marital duties defined by the halacha include care when the wife is ill. He must also support their children and make provisions for her after his death. Orthodox Jews draw up a marriage contract, the ketubah, which further defines his obligations. Interestingly enough, the focus of the Ketubah is on what the man proposes to provide, rather than a mutual agreement. She can accept or decline; it outlines her rights and his obligations.

In order to follow the halacha closely, Orthodox m
en have a number of religious duties or mitzvot. While the Torah requires all Jews to perform some mitzvot, some are obligatory for men or women separately. Women are frequently exempt from mitzvot determined by time. However, Orthodox men are expected to learn and teach the Torah, to put a tzitzit on corners of clothing, to wear tefillin, and to pray both morning and night.

While the Torah requires numerous religious observations, it also directs many ethical considerations in everyday life. Orthodox men must deal honestly in business. They’re forbidden from charging interest on loans to other Jews, nor can they hold back a workman’s wages. Orthodox men take their vows seriously, as the Torah requires that he fulfill any promise in a timely fashion.

Many of these mitzvot mean that Orthodox men will often dress in ways that seem quaint in modern times. Generally, Orthodox Jews of both sexes dress modestly. In the Haredic traditions, Orthodox men have a rather distinctive appearance.

Haredi Orthodox men and their appearance

Most Jewish men cover their heads with skull caps or yarmulkes in synagogues and while at prayer. Haredi Orthodox men keep their heads covered at all times, usually with a large black hat over the yarmulke. Also in evidence are prayer shawls, known as tzitzit, a square garment with knots tied in the four corners.

Haredi Orthodox men also refrain from shaving. Based on Leviticus, they don’t shave or cut the hair in front of their ears. The Talmud includes shaving as part of dressing as a woman, which is also prohibited.

The halacha forbids men from shaving the “corners of the head,” which results in the distinctive payot or “earlocks” you’ll often see on Orthodox men.

For the most part, the Talmud prohibits Orthodox men from using a razor against their skin. Rabbinic authorities have sanctioned scissors, and modern technology has provided the electric razor, which authorities also find permissible. While many Modern Orthodox men may use either to trim their beard, Haredic men rarely will remove their beards. Both may trim mustaches when they interfere with eating.

The Future for Orthodox Men

Orthodox Judaism is a vital and growing part of the Jewish faith. Several schools of thought provide some flexibility for it to move within secular society. But, the core beliefs and adherence to halacha ensure its survival and even its growth.

In America, Orthodox synagogues and communities have flourished. Other streams have smaller families and decreased involvement in the Jewish community. Many Jews of more liberal streams find themselves disengaged from religious life, with their identity as Jews being tied to culture rather than faith or religious practice.

In contrast, Orthodoxy provides a clear sense of one’s place in the community and the family. Orthodox men have faith that the path laid out for them will lead to God’s approval. Along with that, they feel that the wisdom inherent in the law is the recipe to worldly happiness as well.