The Tradition of the Jewish Bris Ceremony

What is a Bris?

Wondering what to expect at a bris? Here’s your breakdown: before a bris ceremony takes place, the baby boy is prepared for his rite of passage by being placed on a large pillow and being carried into the circumcision room by a special person (or a few persons) in the baby boy’s life. In Jewish tradition, it is a great honor to be asked to carry a baby to the bris ceremony, and this is a request most people regard with great gratitude.

Once the baby is in the room, he is handed to a sandek, which is what the person who holds the baby during the circumcision is called. While this role is traditionally filled by one of the baby’s grandfathers, it can be filled by anyone designated by the parents.

At that point, the mohel enters the room. A mohel is a member of the Jewish tradition who has been trained to perform circumcisions, and who will carry out the bris ceremony. Upon receipt of the baby, the mohel greets him with the phrase Baruch Ha-Ba, which translates to “blessed is the one who has arrived.”

Next, there comes a round of prayers. During this process, the mohel recites a blessing that acknowledges the commandment of circumcision. Next, the mohel will place a shield around the baby’s penis (designed to protect it from accidental cutting). At that point, the mohel will use a knife to remove the baby’s foreskin, and then he will tear off the mucous membrane so that the penis glans is exposed. The final stage of the ceremony is called the metzitzah, and involves the mohel cleaning the blood from the wound with gauze.

At this point, the surgery is over and the celebration begins. 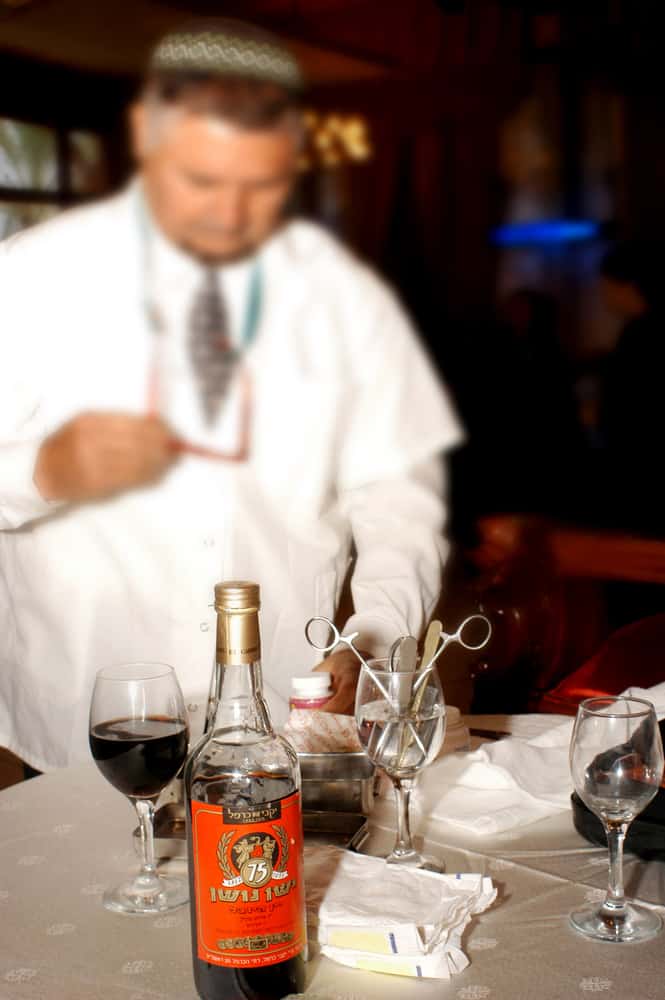 Once the circumcision is complete, the father of the baby will recite a blessing. In some more liberal Jewish communities, both parents will recite the blessing. Once the blessing is over, the guests will respond with the following words: “Just as this child has entered into the covenant, so may he enter into (a life of) Torah, the marriage canopy, and into good deeds.”

At this point, the mohel will lift a glass of wine and recite a prayer. Immediately after he will announce the baby boy’s new Hebrew name. The mohel will then place a drop or two of the wine in the baby’s mouth and the parents will drink some as well.

After the ceremony, the bris guests will move on to a buffet, which typically features foods like bagels and lox, although many other items may be served, as well, since there are no rules stating which foods must be present or not.

The Importance of the Bris in Jewish Tradition

The bris is a critical rite of passage for young Jewish boys. Their first step into a world of ritual and adherence, the bris serves as a coming-out party, naming ceremony, and rite of passage, all in one. Relatives who attend the bris seldom forget the experience, and being asked to participate is a special honor most people remember for a lifetime. While there are many celebrations and traditions in Jewish heritage, this is one of the most important.