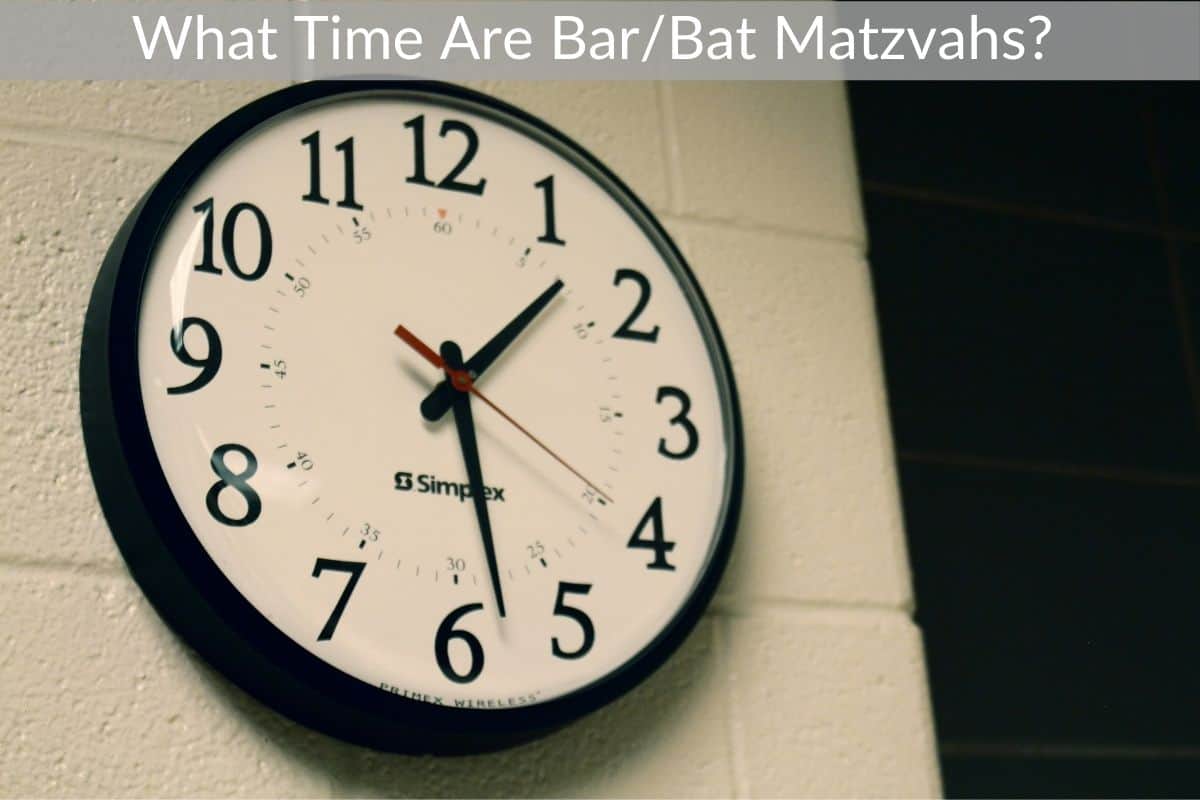 Bar/Bat Mitzvahs are special ceremonies which mark the transition of a young boy or girl into adulthood. This tradition symbolizes that the child is now responsible for his/her actions and is a member of the Jewish community.

Bar/Bat Mitzvahs take place around age 13 (sometimes 12 for girls) although adults can have one too. The ceremonies are filled with reading the Torah, chanting the Haftarah and praying for the young Jew.

After the service a party is held for the child which involves cake, music, and dancing to celebrate this milestone in their life as a Jew. The time a Bar/Bat Mitzvah takes place can vary.

If the family of the Bar/Bat Mitzvah wants to do the ceremony on a particular day and at a certain time then this is perfectly fine. A Jewish congregation will have a time when these are done but there are no set rules on when exactly to do them.

A Bar/Bat Mitzvah usually happens the Sabbath after the child’s 13th (or 12th) birthday, but can be held whenever the family wants. Adults can even have a Bar/Bat Mitzvah ceremony if they choose to.

The reason these take place around the child’s 13th birthday is because Jewish law states that young Jews enter adulthood at that age. Thus, many years ago, Jews created a tradition of the Bar/Bat Mitzvah ceremony and celebration to symbolize this.

According to The Mitzvah Maven: The Time of the Service, “There are many options you have as to when you will be throwing your party.”

They continue to say that, “Most of the Bar/Bat Mitzvah services are held on Saturday morning in your temple/synagogue. You may select to have your party immediately following services on Saturday afternoon or wait til Saturday night to begin the celebration.  Sunday afternoon or evening are other options to consider when selecting the perfect timing for your unique event.”

Ultimately it is up to the family to decide exactly what time works best for them and their guests to attend. To see some popular Bar/Bat Mitzvah gifts just click here.

How Long Does A Bar Mitzvah Ceremony Last?

Bar/ Bat Mitzvah ceremonies are important for young Jews. That is why they typically last for a while.

How long they last exactly varies but these celebrations can last for many hours.

The Bar/Bat Mitzvah ceremony can last for several hours. Typically these last for around 3 hours. The child reads for about 20 minutes and the rest of the services are filled with praying and chanting. The party afterwards can also last for multiple hours.

The Hebrew ceremony itself can take a few hours. There is reading of the Torah, chanting the Haftarah, as well as praying for the young Jew. Afterwards a party is thrown for the child which can last for hours as well.

This timing all depends on what the family wants to do but if you go to a Bar/Bat Mitzvah expect to spend many hours at the event.

How Long Is A Bar Mitzvah Service explains that, “Bar and bat mitzvah ceremonies in conservative synagogues typically last three hours, with most services held in Hebrew. The child undergoing the ritual reads a longer portion of the Torah, sometimes up to 20 minutes. Services in Reformed synagogues are usually in English…The average Bar Bat Mitzvah party lasts 45 hours. If only the kids are partying, it’s usually 34 hours.”

When Did Bar/Bat Mitzvahs Start?

The Jewish tradition of a Bar/Bat Mitzvah isn’t written into the Jewish law as something a young Jew has to do. It is a tradition that was started many years ago for symbolic representation.

Bat/Bat Mitzvahs started back in the 15th century to symbolize the coming of age for young boys. It wasn’t until the 20th century when girls were allowed to have a ceremony as well called a Bat Mitzvah.

By the early 20th century, many bar mitzvah boys publicly pledged “to love, honor and keep the Holy Torah.” The 20th century also witnessed the spread of a parallel ceremony for girls, known as the bat mitzvah…”

Beginning many years ago, this ceremony has become a tradition for the Jewish community. Symbolizing a tration into adulthood, the ceremony is special because it shows that the young Jew is now responsible for his or her own actions.

Bar/Bat Mitzvahs don’t have to start at a certain time. The usual date such a ceremony takes place is the Saturday after the child’s 13th (or 12th) birthday.

The service can be held on Sabbath in the morning, afternoon, or evening. However, it is typically held in the morning to give ample time for the ceremony and celebration since these can go on for hours.

Many years ago the Bar Mitzvah for boys was started in the 15th century and Bat Mitzvahs for girls followed starting in the 20th century. Jews are very traditionally people and dedicated Jewish parents want their child to have one of these ceremonies to symbolize that they are transitioning into adults and are now a responsible member of the Jewish congregation.

There isn’t a certain date or time although traditionally like I said before it is usually held on the Sabbath after the child’s 13th birthday. When the Bar/Bat Mitzvah is held and what time it starts is entirely up to the family of the young Jew.