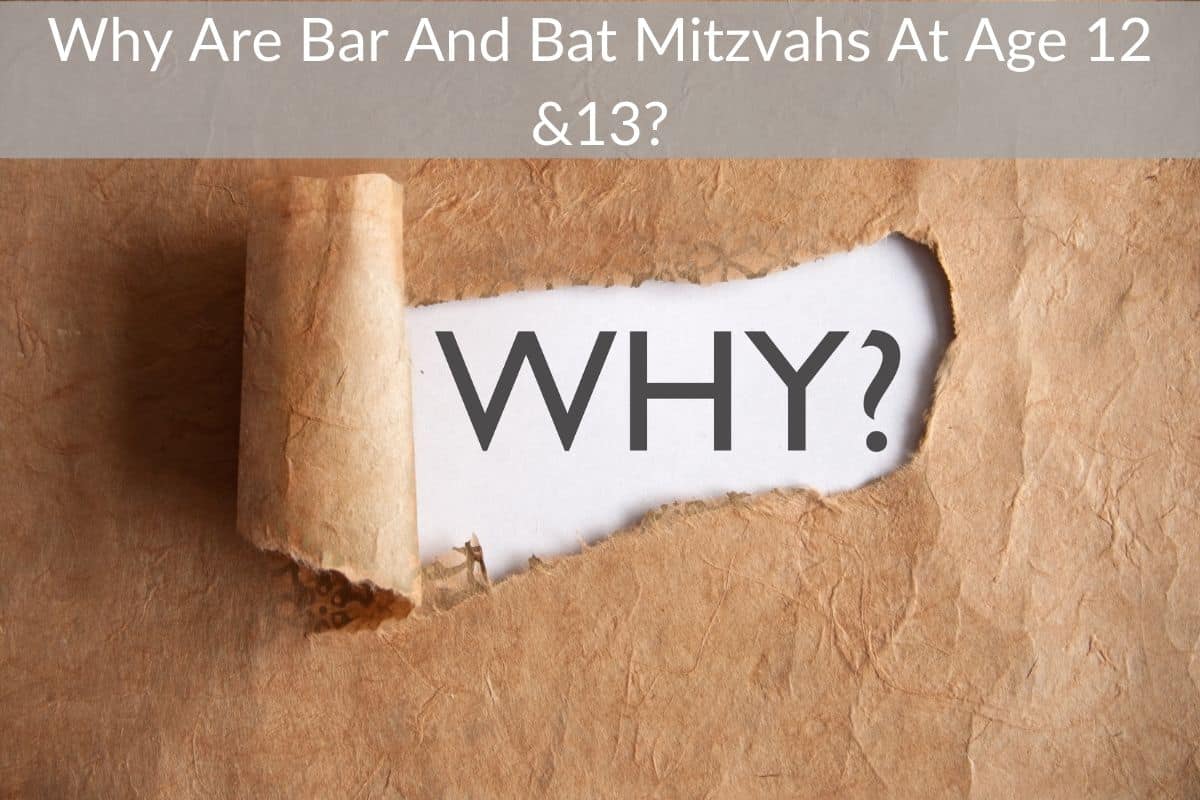 The Jewish community has many traditions they follow. One of these traditions is called a Bar/Bat Mitzvah.

This is a ceremony and celebration for young Jews and can take place in the synagogue or privately.

Consisting of a ceremony of readings, chantings, and praying it is a symbolic tradition for Jews. The service is then followed by a long party afterwards.

Bar/Bat Mitzvah is important to Jewish people. The event typically happens around the child’s 13th birthday (sometimes 12th for girls) and shows the child gaining more responsibility within the Jewish community as well as becoming an adult.

According to Jewish law, 13 years old marks the transition into adulthood and Jews stick with tradition. If you don’t know much about Jewish culture you could be wondering why this particular ceremony is done around this age.

Is there a reason why Bar/Bat Mitzvahs are at age 13 and 12?

Bar/Bat Mitzvahs happen at age 13 and 12 because according to Jewish law, when a child reaches this age that they are becoming an adult and are now responsible for their actions. The Bar/Bat Mitzvah ceremony marks this transition.

Jewish law states that this traditional ceremony should be held around the child’s 13th birthday. In Judaism, they follow what the Jewish law says which is the reason for many of their traditions.

For boys, this takes place at age 13 and for girls it depends on the type of Jew they are. Reform and Liberal Jews hold the ritual around their 12th birthday and Orthodox and Conservative Jews hold it on their 13th birthday.

A Bar/Bat Mitzvah marks the transition into adulthood for young Jews and thus being held around their 13th birthday. The ceremony shows that the child is now a responsible member of the Jewish community.

To see the most popular gifts for a Bar/Bat Mitzvah just click here.

Can You Have A Bar/Bat Mitzvah After 13?

Bar/Bat Mitzvahs are usually held at age 13. The Jewish law states that young Jews become an adult at this age and as a tradition a ceremony and celebration is held in honor of this.

But what if an adult wants to have one of the ceremonies. Can you have a Bar/Bat Mitzvah after 13?

Even though traditionally a Bar/Bat Mitzvah is held at age 13, an adult can also have one of these ceremonies. An adult Bar/Bat Mitzvah can be performed in a variety of ways and held at any age after adulthood.

Some young Jews decide not to have a Bar/Bat Mitzvah when they turn 13 because they don’t want to do it just for a big party. Maybe they even are questioning the Jewish religion and it isn’t until later that they decide to do the ceremony.

Or perhaps their parents aren’t very religious and do not care if they have a ceremony or not. Years later, the child may decide that they want a Bar/Bat Mitzvah after all.

Bar/Bat Mitzvahs can happen at many ages. This is because of several reasons but it can be done.

According to My Jewish Learning, “…The bar or bat mitzvah ceremony isn’t a mandatory rite of passage; by Jewish law, a boy reaches adulthood when he turns 13 and a girl at 12, no ceremony required. The very lack of necessity makes such an effort even more remarkable as a concrete, hard-won, and public affirmation of Jewish identity and commitment.”

Why Is The Bar/Bat Mitzvah Important?

Bar/Bat Mitzvahs are an important part of Judaism. Jews take their traditions very seriously and the Bar/Bat Mitzvah is no exception.

It is an important event in a dedicated Jews life. But why is a Bar/Bat Mitzvah so important?

The Bar/Bat Mitzvah is important to Jews because it symbolizes young Jewish children taking their place in the Jewish community and becoming adults. As a religion that follows tradition it is a special event for them.

The earliest recorded time for a Bar/Bat Mitzvah was in the 15th century. The child makes a blessing by reading from the Torah, chanting the Haftarah and delivering a teaching to the Jewish community.

He/she also offers thanks to his parents and guests. This tradition of 13 year olds entering adulthood and becoming responsible members of the Jewish community has been around for a long time.

Because of what it symbolizes and means, a Bar/Bat Mitzvah is important to Jews. This ceremony marks the transition into adulthood for young Jews turning 13 years old.

But, Bar/Bat Mitzvahs aren’t limited to this age and adults can have a ceremony later on in their lives. It shows that a Jew is responsible for their actions and becoming a part of the Jewish community.

To celebrate the Bar/Bat Mitzvah, there is normally a party following the service.

Bar/Bat Mitzvahs are at the age of 13 and 12 because Jewish law states that is when they should be held. At this age young Jews are seen as entering into adulthood and becoming members of the Jewish community, they are then responsible for their actions.

To symbolize this, they have a  ceremony which includes readings, chantings, and prayers. This service is then followed by a party of celebration.

Adults can have a Bar/Bat Mitzvah if they choose to and these can be performed in several ways.

A Bar/Bat Mitzvah is important to Jews because of what it means as well as being an ancient tradition dating back to the 15th century.