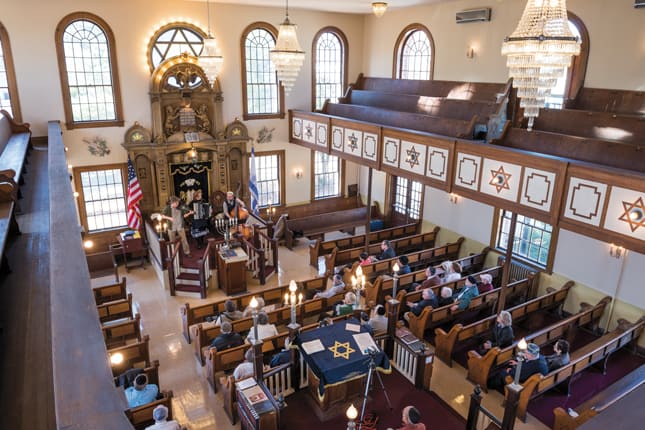 The Jewish religion, or Judaism, has many special features and unique characteristics among religions. One of the most beautiful and treasured aspects of being a Jew is attending prayer services and worshipping in a synagogue. The synagogue definition is a Jewish “house of prayer”, or “house of assembly” where Jews go to pray, perform religious rituals, and study the Jewish texts such as the Torah.
The term synagogue is only one of the names for a Jewish “church”, there are several others. The root word in Hebrew for synagogue is beit k’nesset (the literal translation of this is “house of assembly”. Orthodox Jews use the term “shul” frequently to describe a Jewish church, and Reform Jews usually reserve the word “temple”. Conservative Jews typically prefer the term “synagogue”.
Synagogues are independent community organizations which do not answer to any authority within the United States. There are the individual branches of Judaism, but although synagogues may serve a specific branch, the branches have no real power over them. Synagogues are led by a board of directors comprised of different lay people from various parts of society.
The synagogue serves several purposes, one of which is a house of prayer (beit midrash), either for individuals or in groups. Other functions of a synagogue include a social hall for non-religious activities, as well as religious functions. Sometimes, it serves as a community center where matters of importance can be discussed and acted upon.
Jewish education is a life-long process, and most synagogues have a library of Jewish texts, as well as the Torah, where study is performed at all age levels for observant Jews. In Jewish colleges such as Touro college, education can take an accredited formal form. In addition to these functions, a synagogue can sometimes act as a social welfare body, collecting donations of money, food, clothing and distributing these among the poor and needy within the community.

The History of the Synagogue

Synagogues have ancient origins and existed in abundance long before the destruction of the Second Temple in Jerusalem in 70 CE. Before the temple was destroyed, communal worship in synagogues centered around sacrificial offerings (or “korbanot”) primarily. These were offered by the priests of the day (the “kohanim”) in the Temple of Jerusalem.
Synagogues were built for prayer or other purposes and used for prayer and existed in early versions, such as the synagogues found in Egypt that date as far back as 3 BCE. Over a dozen synagogues dating back to the time of the Second Temple have been discovered and identified by different archaeologists. Many modern-day synagogues exist that were built in the 19th and 20th century.
Although many synagogues existed before the Jewish-Roman war and the destruction of the Second Temple, they only became the stronghold of worship they are today until after that period of time. For the Jews who had survived the Revolt, the time of diaspora came and worship was conducted mainly through prayer and no longer through sacrifice. This made the synagogue a good place for Jews to worship, as it became a portable system of worship, unlike the destroyed Second Temple.
Orthodox synagogues are designed with a partition (or mechitzah) which divided the seating areas of the men and women, whereas sometimes women would be seated in a balcony area. Men in the synagogues wear skullcaps, or yarmulke. This headwear is worn by more devout Jews out of respect to God and is a part of the dress code for orthodox Jews. Wearing a yarmulke is mandatory for synagogue attendance for men.
Any group of Jews can build a synagogue, and new ones are constructed periodically. Many new synagogues in America have design characteristics that look like other churches in their communities, rather than the older designs of the past. Many different people and groups of people have built synagogues, including Jewish Kings, wealthy individuals and institutions, governments, and even hotels. There are an unknown number of synagogues around the world, but many of them do exist within the United States.

How to Find a Synagogue Near Me

Perhaps you are Jewish and are interested in connecting with a synagogue in your area, or you are interested in Judaism and want to investigate what it is all about. Most synagogues welcome visitors who are genuinely curious about the Jewish religion. All they ask is that you behave properly, which means “witnessing” or “proselytizing” in any way is strongly discouraged.
People who come to see what the Jewish faith is about are not turned away, and although in most cases conversion to Judaism can be a somewhat tedious and sometimes difficult process, it can and is done regularly. There are many different synagogues located in America and around the world to check out. If you want to find a synagogue in your area, you can look for them in your phone directories and call them or visit online resources for more information.