Is There a Difference Between the Yarmulke and the Kippah? 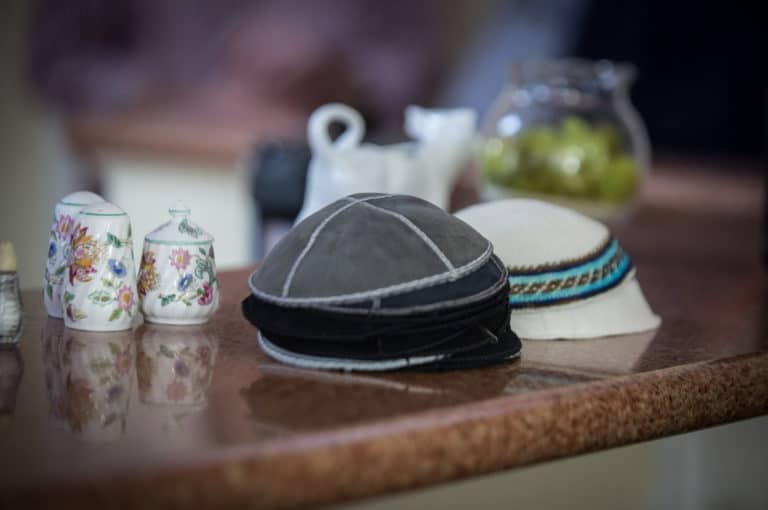 The small, brimless caps are typically called a yarmulke or kippah. But the words are not synonymous. The type worn can often signify the wearer’s degree of devotion or denomination. However, whatever the style, color, or size, the yarmulke has come to represent Jewish faith across the world.

The Difference Between the Kippah and the Yarmulke

Hebrew uses the word “kippah” to refer to any head covering worn for religious purposes. The word literally means “dome,” and Jews wear them to show respect for God. Most Jewish men wear it when attending the synagogue, praying, studying the Torah, or making a blessing.

While the Torah requires priests in the Temple to cover their heads, it is less specific for laymen. The wearing of a kippah by laymen became quite popular during the middle ages. Since then, many Rabbinical authorities have made wearing a kippah mandatory. Orthodox traditions require that males wear them at all times, and many sects define themselves by the type of kippah they wear.

The yarmulke, however, is Yiddish for a very specific type of kippah. It’s the skullcap that many see adorning the heads of many Jews. Some strict Orthodox men (Haredi Orthodox) wear both the yarmulke and an additional hat over that. The type, style, and materials of the yarmulke often indicate the wearer’s sect and piety.

The Story Behind the Kippah

The varying denominations of Judaism have different clothing guidelines for their members. For example, Orthodox Jewish men always cover their heads with a skullcap. It is often viewed as an indicator of how devout you are.

In Orthodox Judaism, women also cover their hair in public after they’re married. On the other side of the scale, Reform Jews take the head-covering tradition as an optional standard. Women who are Reform or Conservative Jews may wear a kippah too. Some Reform women also wear the yarmulke when studying Torah or saying prayers.

Using a head covering is considered a sign of respect for God. Some people say that it shows that the wearer is cognizant of the separation between himself and God. Wearing a cap shows humility and modesty toward other people, too.

Head coverings are described throughout the Torah, but you won’t find a command for people to wear them. Although people disagree about whether head coverings are included in the Torah commandments, the practice is suggested in the Talmud. The Talmud states, “Cover your head in order that the fear of heaven may be upon you.”

It is said that the Babylonian sage, Hunah ben Josuah, would never walk even four cubits with his head uncovered. When asked, he explained, “Because the divine presence is always over my head.” According to Maimonides, the great Jewish legalist of the medieval era, it is forbidden to pray when one’s head is uncovered.

The Mishna Brurah, another work of Jewish law written in the early 20th century, says that a head covering should be worn even if the men are not moving.

The History of the Kippah

Archaeological relics support the use of head coverings in Judaism. On Sennacherib’s marble relief, the Israelites appear with headdresses. The Torah itself describes the head coverings worn by the priests in Exodus

In Medieval Europe, the “Jewish hat” was worn instead of the kippah. This head covering was larger, cone-shaped, and had a wide brim. During the 1200s, rulers required Jews to wear these hats to distinguish themselves from Christians. It was a form of persecution much like the yellow star in the Holocaust. However, their use was optional after the Jewish emancipation.

It is evident that over time, the practice of covering the head has become an accepted Jewish custom. Men, even those who aren’t Jewish, are encouraged to wear kippot at certain times. At momentous events such as bar mitzvahs, disposable or custom kippot will be available for guests to wear. If you’re not Jewish, you should still respect the religion’s traditions and wear the yarmulke provided. Many holy places across the world, including synagogues and Jewish cemeteries, require visitors to wear yarmulkes.

Technically, a hat of any kind will do. Jewish law says that any form of head covering is acceptable. In a pinch, you could cover your head with a handkerchief. The yarmulke is light and compact, which probably accounts for its popularity.

While it’s a Yiddish word, the word “yarmulke” comes the Polish word “jarmulka,” which means “cap.”

Although a yarmulke is always small enough to cover just the top of the head, its size can vary. It never covers the ears. However, its edge can start about 1-1/2 inches from the top of the ear or as far away as 3 inches. The size that you choose depends on your head shape, preference, and even the stream of Judaism you practice.

The Talmud specifies that a head covering should be made of wool or straw. However, these days, people wear a wide variety of materials.

You won’t find prohibitions against any particular colors, although certain colors have generally accepted associations, though. 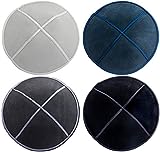 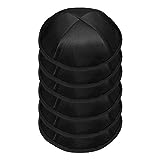 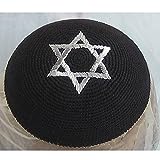 While the yarmulke identifies a member of the Jewish faith around the world, the fact that different denominations tend to wear different types of yarmulkes is less known.

Haredi Orthodox men generally wear a black velvet yarmulke, about 5 inches in diameter. They usually wear them under a larger black hat in compliance with Kabbalist traditions and beliefs. Most wear a substantially sized yarmulke that covers a large portion of the head.

Many traditional Orthodox men also wear a plain black velvet or even silk yarmulke, although most wear a smaller version. Many Modern Orthodox men wear also wear a knitted or crocheted version. However, they may be more open to patterns and decorative elements in subdued colors.

Conservative Jews often wear a large, interlaced yarmulke, many with patterns and decorative rims. Light blue yarmulkes in a knit pattern may indicate Zionist sentiments, while Reform Jews may not wear one at all, even at the synagogue.

Some Chassidic Jews living in Jerusalem wear a white knitted yarmulke, while Breslover Chaddisum Jews wear them worldwide. Traditionally, the white yarmulke often includes a pom at the top. White kippahs symbolize celebration and festivity. They may also represent religious purity. Many Jews choose to wear a black yarmulke when in mourning a loved one.

You can find skullcaps in an abundance of colors and designs. Some may even be themed after your favorite sports teams. You can have a custom yarmulke made for a special event, too. Schools and other organizations often use puffy paint to write children’s names on kippot. Many decorate them for Bar Mitzvahs and other significant occasions.

And, as more women study Torah and take on broader roles in Jewish religious life, decorative yarmulkes with feminine touches such as ornamental bead and metal work have risen in popularity.

At What Age Should Boys Start Wearing a Kippah?

Most parents begin introducing their sons to wearing a yarmulke or kippah at the age 3, after they get their ceremonial first haircut. In the Jewish tradition, the Tisporet (or Upsherin in Yiddish) is a haircutting ceremony that represents the boy’s development from infancy to childhood. It also allows devout parents to show off his sidelocks, or peyos. They may even have him start wearing the tzitzit and learn to recite the morning blessing. This begins his induction into Jewish ritual and education, which culminates with the Bar Mitzvah when the child turns 13.

From this age onward, parents encourage their sons to wear yarmulkes, especially to religious events. Many parents find that it can be hard to get a young child to wear a kippah. Empowering your child to pick out his own yarmulke might encourage him to wear it. He’ll also be more likely to keep it on when he sees other men in your family and community wearing theirs.

How to size a yarmulke

Scholars have debated the appropriate size for a yarmulke over the years. If it’s too small, the cap is not considered to be a proper head covering. Some Rabbis have said that a kippah should conceal the majority of the head. But, most people agree that the minimum size should be three inches.

Every brand fits a little bit differently. However, in general, a child between the ages of 4 and 8 will wear a size 4. From ages 8 to 12, most kids wear a size 5. As they get older, their heads don’t grow as quickly. They might move into a size 6 in their teens, and adults might wear size 6 to 8. The kippah will mold to your head as you wear it. It might also shrink if you wash it. Wear it for several days or weeks to get a good fit.

You may have to use pins or clips to get it to stay on your head. If your hair is short enough, the friction will hold the yarmulke on. Still, it might fly away on a breezy day. A larger yarmulke will typically hold better than a smaller one. Putting the skullcap on the proper part of the head can help it stay on. Seat the yarmulke toward the back of the crown, not near the forehead. Some people attach a small dot of Velcro to the underside of a kippah to secure it to their hair. Bald men may use double-sided fashion tape.

Skullcaps in Religions Around the World

Many people wear skullcaps to express their faith to the world. People of various other religions often wear these small hats that conform to the head. Catholic cardinals wear red skullcaps, while the Pope wears a white one. These hats are called zucchettos, which translates to “small gourd.” This might be because they resemble the exterior of a squash when stitched together. Monks used to have to shave their heads when they entered a monastery. This, combined with the lack of a hood on their copes, might have led them to seek out an alternative for staying warm.

So, while Jews are not the first or only people that wear skullcaps as a sign of religious faith, they have kept this tradition alive for centuries. While the choice of color, size, and pattern is a personal or religious preference, the timelessness of this tradition has forged a legacy of respect for God.